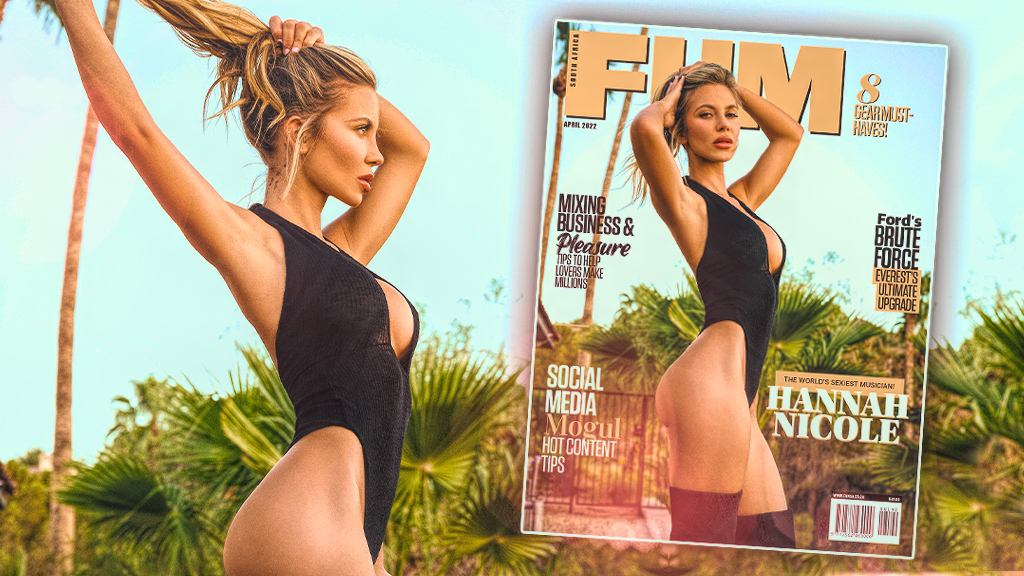 Move over Miley Cyrus and Madison Beer! The World’s Sexiest Musician is Supermodel Hannah Nicole! FHM and The Heyman Hustle can now EXCLUSIVELY reveal that she is the newest member of the #HustleBootyTempTats roster!

In yet another exclusive #BreakingNews item reported first right here on FHM South Africa, we can confirm that social media influencer and classical music pianist, flutist and director Hannah Nicole is the newest addition to the #HustleBootyTempTats supermodel roster.

The “anti-influencer influencer” brand is the brainchild of WWE WrestleMania “special counsel to the champion Roman Reigns” legend Paul Heyman, who in his spare time from the main event of sports entertainment’s biggest spectacle of the year is also the co-founder of New York City’s highly-acclaimed Looking4Larry Agency.

Hannah Nicole joins a roster filled with some of the sexiest (and most interesting) women in the world. Professional Paddle Boarder Jala Sue is a #HustleBootyTempTats supermodel, mom of 4 and multi-time FHM cover model; Playboy Cyber Playmate of the Year Kari Nautique is a published author (“How to Bag a Bunny”) and also an FHM cover model; Ellie Gonsalves is currently signed to WME, became the billboard-girl for a major Guess campaign and has appeared in movies with Dwayne “The Rock” Johnson since being named the very first #HustleBootyTempTats Supermodel of the Year; and Summer Soderstrom, also a new member of Heyman’s roster, was named 2022’s Hottest Supermodel.

Hannah Nicole was born in Shreveport, Louisiana and moved shortly to Gun Barrel, Texas, where her father was employed as a music director. The family continued on their journey, back to Louisiana, as they settled in Lafayette, Louisiana, where Hannah lives to this day. In an exclusive interview with Heyman’s website, appropriately named HeymanHustle.com, Hannah stated, “classical music was the most important aspect of my upbringing, taking part in many band programs and ensembles to intensely study my craft. I received my Bachelors Degree in Music Education, my Masters Degree in Performance Pedagogy, and am in the last semester of my Doctorate Degree in Educational Leadership with a concentration in Curriculum and Instruction.” Impressed? Hold on, there’s more! Hannah also noted, “I am a full time Music Director, but also pursuing my modeling career full time as well, so I split my time between music director work and flying on the weekends for modeling shoots.”

The delicious results of her modeling pursuits are seen on these pages. As for her passion for music, Hannah also noted, “I perform in two symphonies where I play both flute and piano. I am working on building a non-profit organization that gives back to Art programs in need of resources in order to give children a creative outlet in which to focus and express their emotions, thoughts, and individuality.” In other words, this young beauty keeps quite busy. “We had our eyes on Hannah Nicole for over a year,” noted The Heyman Hustle’s web director Anthony Abbas. “The gorgeous and beautiful pianist who plays Beethoven, Bach, Tchaikovsky at classical music concerts is, at the very same time, one of the sexiest swimsuit, bikini and lingerie models in the entire world? How freakin’ fascinating is that?”

With Victoria’s Secret abdicating its own throne as the most prestigious supermodel brand in the world when it folded its long-running “Angels” concept (putting supermodels like Candice Swanepoel, Miranda Kerr, Adriana Lima and Stella Maxwell on the open market), Heyman’s agency, as is his rep, went to the “extreme” of renting a 20,000,000 USD estate on Lake Las Vegas and flew in some of the world’s most beautiful (and, as we mentioned, interesting) supermodels along with superstar photographers with whom the supermodels would collaborate. Hannah collaborated with award-winning photographer and artist Elm Diaz, and their work blew us away. Which, in all candor, should not be surprising.

Hannah Nicole is an extraordinary, multi-talented woman, and it’s no wonder she’s the newest member of the roster Heyman has positioned as the hot disruptor in the supermodel business, the #HustleBootyTempTats supermodels!

We’re HustleTweeting about #HustleBootyTempTats supermodel (and FHM cover model) Hannah Nicole, and you’re more than welcome to join the conversation on the Hustle Twitter HERE … on our ridiculously sensational Instagram HERE … or on our Facebook page HERE!