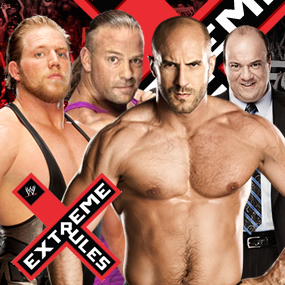 Our very own Hustler De Tuti Hustlers Paul Heyman brings his client to the IZOD Center in New Jersey, where Cesaro defeats RVD and Jack Swagger in an epic and bloody battle.

Prior to the start of the personal free-for-all, the outspoken Paul Heyman stole the spotlight early, professing the virtues of the Extreme and his “Paul Heyman guys” amidst the eardrum-shattering collection of jeers courtesy of the WWE Universe in the IZOD Center. The instant the bell rang, though, the fast and furious showdown transformed the Heyman show into an absolute thrill ride from start to finish.

With all three Superstars well-versed in the extreme, the brutality quickly spread both inside and outside the ring. However, moments after Cesaro displayed his renowned super-strength by suplexing Jack Swagger into the ring while perched on the second turnbuckle, RVD closed out The Real American with the Five-Star Frog Splash, sending both him and his mentor, Zeb Colter, back to the showers.

The action continued with one jaw-dropping maneuver after another, testing the determination of both competitors. While RVD introduced the trash can, Cesaro quickly kicked it back at him. The weapon then helped switch momentum back and forth. But when the King of Extreme tried to deliver his second Five-Star Frog Splash of the night with the trash can on his adversary’s chest, Cesaro moved at the last second,  then hit RVD with the Neutralizer onto the metal implement for the three-count.

Cesaro scored a strong victory equal to his power at Extreme Rules. What’s up next for the Swiss Superman? Find out on Monday Night Raw.

Of course, we’re Hustletweeting about Extreme Rules and you’re more than welcome to join the conversation by writing us on twitter HERE or write to us directly at hustleoncrave@gmail.com Hey, have you checked out the Hustle’s Ultra High Quality You Tube Channel, with exclusive videos featuring OUR WORLD EXCLUSIVE WITH MIKE TYSON … BROCK LESNAR’S “HERE COMES THE PAIN” … ICE-T AND COCO’s SEX SECRETS … MMA BAD BOY NICK DIAZ … the list goes on and on, so if you’re not subscribing, you’re missing something … and by the ways cheapos, it’s FREE! Yes, absolutely 100 percent FREE! What are you waiting for? Check it out HERE!

CLICK ON THE PICS BELOW TO SEE THE ENTIRE PHOTO GALLERY
OF THE EXTREME RULES TRIPLE THREAT ELIMINATION MATCH!