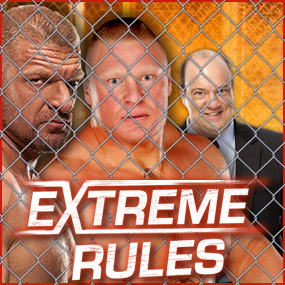 In what Triple H himself described as a “war,” Brock Lesnar now leads 2 victories to 1. It’s been a very interesting ride. BROCK LESNAR DEFEATED TRIPLE H VIA TAP OUT AT SUMMER SLAM, but “The Game” came back from his second broken arm, as TRIPLE H EVENED THE SCORE AT WRESTLEMANIA!

So when the two collided in a Steel Cage Match at WWE Extreme Rules, it was advertised as the end of their rivalry, and the match was epic to say the least. According to WWE.com:

The Anomaly roared back immediately, hurling Triple H against opposite ends of the cage like a ping-pong ball before trapping him between the ropes and chain link, pounding away as if The Game were a heavy bag. Lesnar’s enthusiasm cost him in the process when a flying knee missed Triple H’s head and collided with the cage instead, hobbling “The Beast Incarnate” and giving Triple H a target to keep the fight at an even keel.

With his knee — and by association, the F-5 — taken away from him, The Anomaly turned to the Kimura Lock and a steel chair tossed into the ring by Heyman. But Triple H was ready for that as well, assaulting Lesnar’s leg before applying a Figure-Four Leglock and, later, a Sharpshooter, in a bid to make Lesnar submit. The Anomaly’s refusal to tap out kept him in the hunt, but The Game again raised the bar with the use of the chair and a hidden sledgehammer painted silver to match the hue of the steel.

The mix of strategy and hubris (Triple H grinned wildly when he first retrieved his signature implement) would come back to haunt The Game, though. The hammer that has so often been the difference-maker for The King of Kings proved again to be the deciding factor in this bout, but not in the way the 13-time World Champion had hoped.

Of course, we’re HustleTweeting about Brock Lesnar vs Triple H, and you’re more than welcome to join the conversation by following us on twitter HERE or write us directly at hustleoncrave@gmail.com  Hey, have you checked out the Hustle’s Ultra High Quality You Tube Channel, with exclusive videos featuring OUR WORLD EXCLUSIVE WITH MIKE TYSON … BROCK LESNAR’S “HERE COMES THE PAIN” … ICE-T AND COCO’s SEX SECRETS … TEEN SENSATION TAYLOR MOMSEN … UFC BAD BOY NICK DIAZ … THE WALKING RIOT MISSY HYATT if you’re not subscribing, you’re missing something … and by the ways cheapos, it’s FREE! Yes, absolutely 100 percent FREE! What are you waiting for? Check it out HERE!