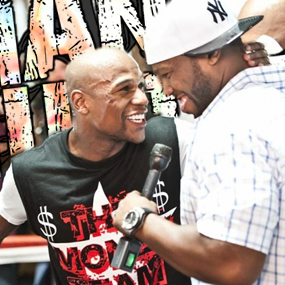 Boxing’s Pay Per View Champion Prepares For His May 5th Showdown with Junior Middleweight Champion Miguel Cotto with a Little Help From His Friend!

On Saturday, May 5th, Floyd “Money” Mayweather will step into the ring at the MGM Grand in Las Vegas against Junior Middleweight Champion Miguel Cotto in what promises to be one of the most heavily-hyped HBO pay per view events of the entire year.

As part of the Mayweather Hype Machine, Floyd put on a show for the cameras this week during his Media Day Workout, as he wasn’t alone. Along with the usual cast of characters (Leonard Ellerbe, “Uncle Roger”) was hip hop artist 50 Cent, described by Floyd to anyone who will listen as his best friend in the world.

Floyd Mayweather is moving back up to junior middleweight to challenge Miguel Cotto for the title. Floyd fought at 154 pounds once before, when he won a split decision against Oscar De La Hoya to win the Light Middleweight Title on May 5, 2007.

In a stark contrast to how Mayweather has berated his previous opponents, Money May has been very respectful toward Cotto throughout the hype, trying to build him up as a legitimate threat to Mayweather’s undefeated streak.

“The fans should watch,” Mayweather stated, “because in my eyes, Miguel Cotto is an undefeated fighter,” even though Cotto has two official losses. “He fought one guy at a catchweight and another guy who got in trouble for cheating. He’s a strong knockout puncher and he always comes out and fights in a pleasing way.”

Cotto was stopped by Antonio Margarito in the 11th round of their first fight, a 2008 welterweight title bout. Many believe Margarito was wearing loaded hand wraps in that fight because he was caught trying to do the same before his next fight, which against Shane Mosley.

Cotto’s other loss was a 12th-round knockout to Manny Pacquiao in 2009. That bout was fought at a catchweight of 145 pounds (rather than the 147-pound welterweight limit) because that is the weight the smaller Pacquiao demanded.

Mayweather accepted the May 5th fight with Cotto at the full 154-pound junior middleweight division limit. He said he wanted Cotto to be comfortable and for there to be no excuses when he wins. Mayweather, who turned 35 in February, also said he sees the end of his career in the near future. “I haven’t taken any abuse in the sport of boxing,” he said. “I think I’m done before 38.”

If he gets past Cotto, one would think the biggest money match for Money May, the fight against Manny Pacquiao, will finally be on the horizon.

Of course, we’re HustleTweeting about Floyd Mayweather vs Miguel Cotto, and you are more than welcome to join the conversation by following THE HEYMAN HUSTLE on Twitter HERE or write to us directly at hustleoncrave@gmail.com  Hey, have you checked out the Hustle’s Ultra High Quality You Tube Channel, with  exclusive videos featuring BROCK LESNAR’S “HERE COMES THE PAIN”  … ICE-T AND COCO’s SEX SECRETS … THE ULTIMATE WELTERWEIGHT BAD ASS NICK DIAZ … CONTROVERSIAL TEEN SENSATION TAYLOR MOMSEN … LEGENDARY MMA PIONEER FRANK SHAMROCK … THE WALKING RIOT MISSY HYATT … if you’re not subscribing, you’re missing something … and by the ways cheapos, it’s FREE! Yes, absolutely 100 percent FREE! What are you waiting for? Check it out HERE!

CLICK ON THE PICS BELOW TO SEE THE ENTIRE PHOTO GALLERY
FEATURING FLOYD MAYWEATHER, “UNCLE ROGER” AND 50 CENT FROM MEDIA DAY! 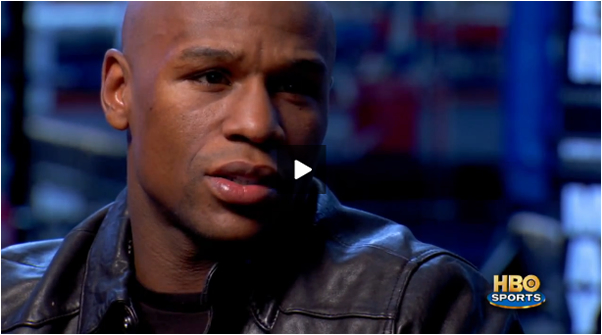