UFC Light Heavyweight Forrest Griffin Wants You To Be Ready For When It All Hits The Fan! 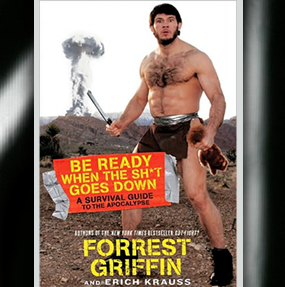 The Super Popular Brawler’s Book Is The Ultimate Survival Guide For Fighters and Non-Fighters Alike!

With all the talk of the book collaboration happening right now involving Undisputed UFC Heavyweight Champion Brock Lesnar and our own Hustler De Tuti Hustlers Paul Heyman, it’s no surprise one of the most talked about books of the summer is Be Ready When The Sh*t Foes Down — A Survival Guide To The Apocalyspe by UFC favorite Forrest Griffin.

The book, written with Erich Krauss (with whom Griffin penned the New York Times bestseller Got Fight?) is yet another demonstration by Griffin that while he is willing to capitalize on his newfound fame (remember, he was the 1st winner on The Ultimate Fighter reality series), he doesn’t really take himself too seriously.

"An excellent book for the UFC fan, and just as good for the non-fan," wrote show business journal and celebrity news site POPWRECKED, "Griffin has a great sense of humor, and one hell of a survival instinct, too!" Griffin will be signing books tomorrow, Wednesday August 11th at 7:00 pm pacific time at Borders bookstore, 6521 Las Vegas Blvd. South in Sin City. We here at THE HEYMAN HUSTLE have received nothing but spectacular reviews for Forrest Griffin’s signings, including the signing last week at Bookends in Ridgewood, New Jersey, where these exclusive photos were taken.

CLICK ON THE PICS BELOW TO SEE THE ENTIRE
EXCLUSIVE GALLERY OF FORREST GRIFFIN!