CM Punk Defeats Ryback at WWE Hell in a Cell 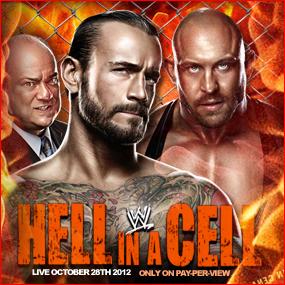 Our very own Hustler De Tuti Hustlers Paul Heyman guides The Best In The World through an improbable title defense against the undefeated monster from Sin City!

CM Punk is still the reigning defending WWE Champion after defeating the never-before-beaten Ryback at the Hell in a Cell pay per view. The victory is not without controversy, of course, but history will record Punk as the victor over Ryback in the HIAC main event.

ATLANTA — Some WWE fans thought it would take an act of God for WWE Champion CM Punk to walk out of his Hell in a Cell Match against Ryback with the title still in his possession. In truth, all it took was an act of deception from the WWE Champion and a WWE official that won’t soon be forgiven.

Successfully executing a plan that could only have sprang from the twisted mind of Paul Heyman, CM Punk became the first Superstar to defeat the human wrecking ball after WWE official Brad Maddox revealed himself to be working in collusion with The Straight Edge Champion. The same referee who garnered Punk’s wrath after some questionable officiating on the Sept. 17 edition of Raw, Maddox changed the course of WWE history by low-blowing Ryback as he was about to finish Punk with Shell Shocked and then counting the pin in less than three seconds. (PHOTOS)

Never in WWE history had a referee broken the rules in such a blatant way. Many would argue his subsequent suspension was not punishment enough.

Punk and the underhanded official may have pulled of a devious plot, but both men ended up in pieces after a very angry Ryback tore apart the ref and Shell Shocked the cowardly champion on the roof of Hell in a Cell.

Of course, we’re HustleTweeting about CM Punk vs Ryback at WWE Hell in a Cell, and you’re more than welcome to join the conversation by following THE HEYMAN HUSTLE on Twitter HERE or write to us directly at hustleoncrave@gmail.com  Hey, have you checked out the Hustle’s Ultra High Quality You Tube Channel, with exclusive videos featuring OUR WORLD EXCLUSIVE WITH MIKE TYSON … BROCK LESNAR’S “HERE COMES THE PAIN” … ICE-T AND COCO’s SEX SECRETS … TEEN SENSATION TAYLOR MOMSEN … UFC BAD BOY NICK DIAZ … THE WALKING RIOT MISSY HYATT if you’re not subscribing, you’re missing something … and by the ways cheapos, it’s FREE! Yes, absolutely 100 percent FREE! What are you waiting for? Check it out HERE!

CLICK ON THE PICS BELOW TO SEE THE ENTIRE OFFICIAL WWE
PHOTO GALLERY FEATURING CM PUNK’S TITLE DEFENSE AGAINST RYBACK!