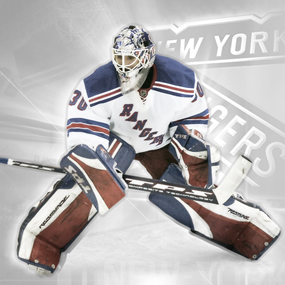 The Superstar Goalie Puts on a Bravo Performance as the Rangers Stay Alive and Prevent a Sweep!

Henrik Lundqvist made 40 saves and had the Madison Square Garden crowd chanting his name in the Rangers’ 2-1 victory in Game 4 of the NHL Stanley Cup Finals, a victory that prevented the Los Angeles Kings from a clean sweep for the championship.

Benoit Pouliot and Martin St. Louis each scored for the Rangers. The dominant Kings are ahead in the series 3-1 as the series heads back to Los Angeles. The Kings had hoped to become the first team since 1998 to complete a sweep in the finals. The Rangers will try to be the second team to erase a 3-0 hole in the finals and go on to win the Cup.

Ironically, it was the Kings who had that kind of comeback,  in the first round against San Jose.

The Kings were in this exact spot in the 2012 finals. They took a 3-0 lead over New Jersey and needed six games to finally knock out the Devils. Lundqvist and the Rangers have continued their mastery of extending their seasons. New York is 11-2 in the past 13 games when facing elimination, and Lundqvist was in goal for all of them. The Rangers also have won an NHL-record eight consecutive home games when facing elimination, dating to 2008, behind Lundqvist.

”This is do-or-die,” St. Louis said. ”Before the game, we were in our game-day routine. We’re a confident bunch. We’ve done great things.”

Of course, we’re HustleTweeting about The New York Rangers, and you’re more than welcome to join the conversation by writing us on twitter HERE or write to us directly at hustleoncrave@gmail.com Hey, have you checked out the Hustle’s Ultra High Quality You Tube Channel, with exclusive videos featuring OUR WORLD EXCLUSIVE WITH MIKE TYSON … BROCK LESNAR’S “HERE COMES THE PAIN” … ICE-T AND COCO’s SEX SECRETS … MMA BAD BOY NICK DIAZ … the list goes on and on, so if you’re not subscribing, you’re missing something … and by the ways cheapos, it’s FREE! Yes, absolutely 100 percent FREE! What are you waiting for? Check it out HERE!