HBK Shawn Michaels To Be in Triple H's Corner at WrestleMania ... which is just fine with Brock Lesnar and Paul Heyman 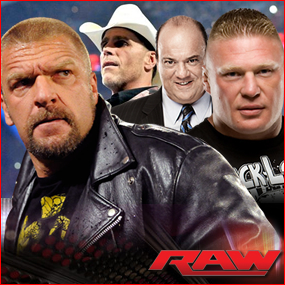 D/X reunites this Sunday as The Game’s career is on the line against our very own Hustler De Tuti Hustlers’ “Beast Incarnate” Brock Lesnar!

WWE WrestleMania will take place this Sunday April 7th, LIVE from MetLife Stadium in East Rutherford, New Jersey. One of the three big main events will feature Triple H, who will now have HBK Shawn Michaels in his corner against Brock Lesnar who will be accompanied by our very own Hustler De Tuti Hustlers Paul Heyman in a No Holds Barred Match with Triple H’s career on the line.

Shawn Michaels returned Monday, announcing his intention to stand in Triple H’s corner at The Show of Shows when The Game battles Brock Lesnar (who broke Michaels’ arm last summer) in a No Holds Barred Match with his career at a stake. It’s a stipulation that surely hits home for the WWE Hall of Famer. The Showstopper’s emotional return and subsequent reunion with Triple H brought out Lesnar and Paul Heyman. With Lesnar sneering at his WrestleMania opponent, The Mad Scientist unleashed his trademark bile on the two former World Champions in an effort to bring The Game to full froth and cloud his emotions as WrestleMania approaches.

Although The Game was ready to fight then and there, Lesnar made his exit before chaos could erupt. It was a wise maneuver as WrestleMania approaches, but a luxury neither competitor will have under the bright lights of MetLife Stadium come Sunday.

Of course, we’re HustleTweeting about Brock Lesnar vs Triple H, and you’re more than welcome to join the conversation by following us on twitter HERE or write us directly at hustleoncrave@gmail.com  Hey, have you checked out the Hustle’s Ultra High Quality You Tube Channel, with exclusive videos featuring OUR WORLD EXCLUSIVE WITH MIKE TYSON … BROCK LESNAR’S “HERE COMES THE PAIN” … ICE-T AND COCO’s SEX SECRETS … TEEN SENSATION TAYLOR MOMSEN … UFC BAD BOY NICK DIAZ … THE WALKING RIOT MISSY HYATT if you’re not subscribing, you’re missing something … and by the ways cheapos, it’s FREE! Yes, absolutely 100 percent FREE! What are you waiting for? Check it out HERE!

CLICK ON THE PICS BELOW TO SEE THE ENTIRE OFFICIAL WWE PHOTO GALLERY OF
BROCK LESNAR AND PAUL HEYMAN’S CONFRONTATION WITH TRIPLE H AND
HBK SHAWN MICHAELS ON THE FINAL RAW BEFORE MANIA! 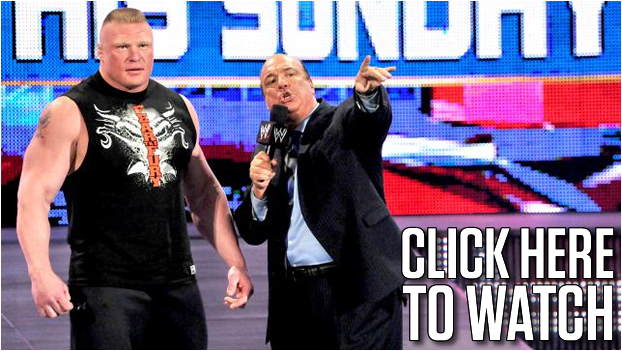