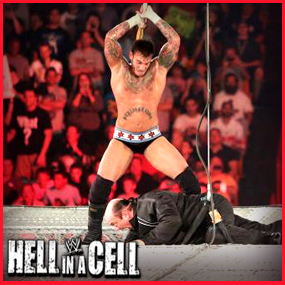 The CM Punk – Paul Heyman Feud Ends On Top of Hell in a Cell!

It’s been the hottest feud in WWE, and now it’s in the history books. CM Punk finally got his revenge on our boss, the Hustler De Tuti Hustlers Paul Heyman on top of the Hell in a Cell structure way above the American Airlines Arena in Miami, Florida. According to WWE.com:

In a wild Handicap Hell in a Cell Match pitting the vainglorious advocate and his caged monster, Ryback, against The Best in the World, the outnumbered Punk scored some well-earned vindication, not only pinning The Human Wrecking Ball nearly 14 minutes in, but also finally dishing out punishment to the man who betrayed him months ago.

From the get-go, it was clear Heyman had no interest in being locked in the merciless structure with The Second City Saint. After Ryback entered the Cell by himself, Heyman rode to ringside in a motorized scissor lift. Microphone in hand, Heyman boasted about being “Satan himself” while the lift rose the extreme architect to the top of the Cell, where he remained for the duration of the match.

With Heyman glaring on from overhead, Ryback plowed into Punk with his high-power offense. “The Big Guy” tried squeezing the air from Punk’s lungs with a tight bear hug, and once he got hold of a kendo stick, the juggernaut teed off on The Straight Edge Superstar. Ryback repeatedly suplexed his outsized opponent into the Cell’s chain link wall and dropped Punk with the over-the-shoulder Boulder Holder.

Savvy as ever, Punk survived the early onslaught and fought back with kendo stick strikes of his own, as well as hauling off with his running knee in the corner. The point of no return for Ryback, however, may have been when Punk connected with a low blow, harkening back to their match from WWE Battleground, and then drove Ryback through a table with a flying elbow drop. After connecting Ryback’s chin to his knee with a GTS, Punk scored the pin.

Then, the real fun began.

With the match result no longer in doubt and a look of disbelief plastered on Heyman’s face, Punk pointed skyward. The crowd inside Miami’s AmericanAirlines Arena, sensing what was to come, swelled with anticipation as Punk tucked another kendo stick into his trunks and began climbing the Cell.

With Heyman looking very much like a stranded walrus atop the structure, Punk stalked his prey. The advocate begged off but Punk would have none of it, and after planting an ominous peck on Heyman’s cranium, The Best in the World slammed the kendo stick into his ex-mentor’s midsection.

Unrelentingly, Punk continued striking Heyman with the cane in a cathartic moment for the entire WWE Universe. Pressing his hands together and nestling them next to his cheek, Punk signaled for the GTS, which the WWE faithful in Miami welcomed with chants of “Go to Sleep.”

For the second time Sunday night, Punk hit his finishing maneuver — this time, perhaps, being the most gratifying one of all. Showered with cheers and shouts of support, Punk stood over Heyman’s motionless body and embraced the moment.

Now that he has dealt yet another beating to his former advocate, has Punk’s war with Paul Heyman come to an end? Or, with the man who claimed to be The Best in the World suffering a major setback, is it only a matter of time before The Second City Saint again finds himself a target for Paul Heyman Guys?

Of course, we’re HustleTweeting about WWE Hell in a Cell, and you’re more than welcome to join the conversation by following THE HEYMAN HUSTLE and telling us what YOU think RIGHT F’N HERE! We got the whole social media thing covered, so check out the Hustle’s Ultra High Quality You Tube Channel, with exclusive videos featuring OUR WORLD EXCLUSIVE WITH MIKE TYSON … BROCK LESNAR’S “HERE COMES THE PAIN” … ICE-T AND COCO’s SEX SECRETS … TEEN SENSATION TAYLOR MOMSEN … UFC BAD BOY NICK DIAZ … THE WALKING RIOT MISSY HYATT if you’re not subscribing, you’re missing something … and by the ways cheapos, it’s FREE! Yes, absolutely 100 percent FREE! What are you waiting for? Check it out HERE!

CLICK ON THE PICS BELOW TO SEE THE ENTIRE OFFICIAL WWE PHOTO
GALLERY FEATURING CM PUNK’S REVENGE ON TOP “HELL IN A CELL!”