Hot Tech News: Apple is About To Go After The GoPro Market 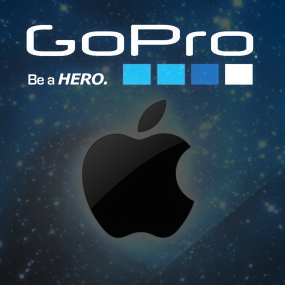 The Mobile Camera Market is About To Become a Fiercely Competitive Environment!

Our very own Hustler De Tuti Hustlers Paul Heyman walked into our LOOKING4LARRY AGENCY meeting and yelled out “so which one of you web pioneers can tell me about APPLE‘s plan to make GoPro go the way of the Blackberry?” The Boss caught us off guard. Here’s what we found out:

The U.S. Patent and Trademark Office recently published a collection of 34 newly granted patents for Apple. The most alluring of these is for a mobile device that would give the GoPro management team a serious f’n headache. The initial GoPro-esque patent was filed in 2012, but now Apple seems to be taking direct aim at improving up the GoPro. In the words of those who were around when the smart phones came after Blackberry, “uh oh!”

The patent criticizes the GoPro HD Hero2 digital cams specifically for “creating excessive wind resistance” while mounted and being susceptible “to damage from vibrations.” As Apple is constantly improving their vibration and recording technologies, this seems like a good place to integrate them. Apple also used part of the technology they purchased from Kodak in 2013 in their recently filed patent plans.

So why should the peeps at GoPro be scared? Well, the new and improved camera and mounting hardware discussed in the patent has the potential to be attached to various sporting equipment (helmets, boards, bikes), as well as, scuba masks and other under water gear, pending Apple’s waterproofing plans. They have also proposed a system that would allow the camera to be controlled remotely by a smartwatch. This is a very strategic move, since Apple’s ecosystem is what keeps it on the cutting edge of competition.

One can therefore envision the camera as an addition to the Apple ecosystem whereby the camera could be seamlessly integrated with an Apple-branded wearable (be it a watch, bracelet, ring, etc.) and then streamed directly to an Apple-branded cloud device, all in real time.

GoPro still has time to counter. We need to note that Apple files hundreds of patents and very few every make it to production. Also, GoPro is going strong with 2.6 million YouTube followers, 4 million Instagram followers and a very smart, active marketing campaign.GoPro also recently announced a partnership with Vislink to develop live wireless HD video to broadcasters during events. We should also alert you to the fact that CAMpanion is introducing a new device that enables you to use your GoPro and smartphone together, so you can use it for everyday activities, not just #EXTREME sports. This gives  GoPros a better “first counter” than the doomed Blackberry, and one could presume that if Apple does indeed release their version of the GoPro, more updates will be be forthcoming so they can stay in the game. On the day Apple was granted their patent, however, GoPro stock fell 12 percent.

Next move in this game belongs to Apple. How GoPro counters will determine their long term future.

Of course, we’re HustleTweeting about Apple vs GoPro, and you’re more than welcome to join the conversation by following the Hustle on Twitter HERE or write to us directly at hustleoncrave@gmail.com Hey, have you checked out the Hustle’s Ultra High Quality You Tube Channel, with exclusive videos featuring OUR WORLD EXCLUSIVE WITH MIKE TYSON … BROCK LESNAR’S “HERE COMES THE PAIN” … ICE-T AND COCO’s SEX SECRETS … MMA BAD BOY NICK DIAZ … the list goes on and on, so if you’re not subscribing, you’re missing something … and by the ways cheapos, it’s FREE! Yes, absolutely 100 percent FREE! What are you waiting for? Check it out HERE!