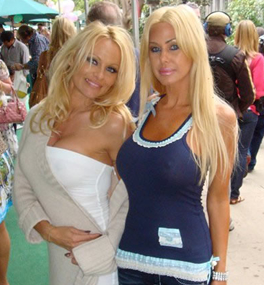 Both women have appeared naked on the pages of Playboy and in some of the strangest bedrooms in Beverly Hills, but rarely have popwreck icons Pam Anderson and Shauna Sand been photographed together.

THE HEYMAN HUSTLE caught Pammy and Shauna frolicking bra-less around The Playboy Mansion for a recent Sunday gathering which included not only the Baywatch Babe and Lorenzo Lamas’ ex-wife, but also Lorenzo’s daughter (from a previous marriage) Shayne Dahl Lamas and Shauna’s best friend Jenn Jowett, who looks like she could be a real handful. And we mean that in the most positive way imaginable.

CLICK ON THE PHOTOS BELOW TO SEE
PAM ANDERSON AND SHAUNA SAND’S
PLAYBOY MANSION SUNDAY INSANITY!

IT’S THE WEEKEND EDITION OF THE HOLLYWOOD CHARLIE MEDIA WATCH.
SMOKE ‘EM IF YA GOT ‘EM, THEN PICK A PIC AND CLICK. COUGH COUGH.