Jenny McCarthy Brings Back "Singled Out" 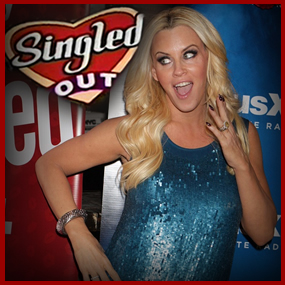 Jenny McCarthy presented Singled Out .. Again on her SiriusXM show Dirty, Sexy, Funny with Jenny McCarthy live from the Ganesvoort Hotel in New York City on Thursday, which is perfect for THE HEYMAN HUSTLE since the hotel is two blocks away from our Looking4Larry Agency offices. Not that we wouldn’t hitchhike across country to photograph Jenny in a sexy outfit, because we would. But when the event is two blocks away, we’re kind of embarrassed to turn in the Uber receipt for reimbursement. Hey, it’s cold here in New York!

The 42-year-old Bombshell was joined by her husband Donnie “Most Hated Man On Earth Just Because He Married Jenny” Walhberg as they celebrated the dating game in celebration of its 20th anniversary. Wow, Singled Out (for those of you old enough to remember it) debuted on MTV in 1995. So we dispatched Digital Charlie to snap the stars, and he surely didn’t disappoint! Of course, we’re HustleTweeting about Jenny McCarthy and you’re more than welcome to join the conversation by following the Hustle on Twitter HERE or write to us directly at hustleoncrave@gmail.com Hey, have you checked out the Hustle’s Ultra High Quality You Tube Channel, with exclusive videos featuring OUR WORLD EXCLUSIVE WITH MIKE TYSON … BROCK LESNAR’S “HERE COMES THE PAIN” … ICE-T AND COCO’s SEX SECRETS … MMA BAD BOY NICK DIAZ … the list goes on and on, so if you’re not subscribing, you’re missing something … and by the ways cheapos, it’s FREE! Yes, absolutely 100 percent FREE! What are you waiting for? Check it out HERE!

CLICK ON THE PICS BELOW TO SEE THE ENTIRE HEYMAN HUSTLE
PHOTO GALLERY OF JENNY McCARTHY AT “SINGLED OUT … AGAIN!”