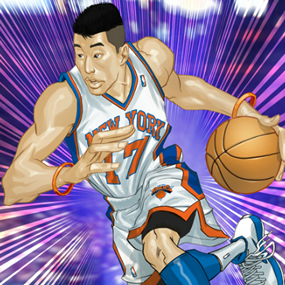 Carmelo Anthony Flexes His Muscles. The Coach Resigns. And The NBA’s Overnight Sensation is Very Sad About It!

It’s been a turbulent week for the New York Knicks, as Coach Mike D’Antoni resigned amidst what is reported to be another clash with star player Carmelo Anthony.

According to several people close to the situation, the tension between D’Antoni and Anthony has been building for 13 months, since Anthony arrived at the home team for The World’s Most Famous Arena, Madison Square Garden, in a wild and controversial trade. It reached a crisis point over the last two weeks, as the Knicks lost 8 of 10 games, despite a brief resurgence that was credited to THE LINSANITY TAKING OVER NEW YORK CITY!

Yesterday morning, D’Antoni asked to meet with team officials and with MSG Chairman  James L. Dolan. It has been reported that D’Antoni asked Dolan if he would be open to trading Anthony before Thursday’s 3 p.m. trading deadline. Knowing NY isn’t big enough for both himself and Anthony, D’Antoni  then offered to resign.

The New York Knicks organization characterized the parting as mutual, but the decision to part ways “was absolutely Mike’s,” according to a D’Antoni associate.

The Knicks were 18-24 as of Wednesday morning, and in danger of missing the playoffs. There are 23 games left on the schedule. D’Antoni never fully sold Anthony on his offensive system, which is predicated on ball and player movement and the premise that whoever is open takes the shot. Anthony thrives in isolation play, which is the antithesis of D’Antoni’s philosophy, and he is most comfortable as a primary ball-handler. That role is now filled by overnight sensation Jeremy Lin, the point guard.

“It’s an unfortunate situation,” Anthony said after the Knicks’ 121-79 rout of the Portland Trail Blazers. “There’s no bad blood between myself, Mike D’Antoni, the guys on the team or anything like that. We respect his decision. He said he did what was best for the team at this point in time right now.”

Asked if he was to blame for D’Antoni’s resignation, Anthony said: “It is what it is when it comes to that. That’s something I can’t control as far as the blame they put on me.”

The Knicks’ style will presumably be tailored more to Anthony’s game now that D’Antoni is gone. Mike Woodson, who favored isolation sets as the Atlanta Hawks’ Head oach, was named the Interim Head Coach. He made his debut Wednesday night against Portland.

Woodson will finish the season, or at least that’s the current plan, after which the Knicks are expected to conduct a broad search for a new Head Coach. Phil Jackson will top the wish list, although the chances that he will come out of retirement seem slight. John Calipari is another likely target, primarily because of his ties to Creative Artists Agency, which represents Anthony and according to reports has increasing influence at the Garden.

Calipari, who is currently coaching Kentucky in the NCAA tournament, denied any interest, telling reporters “Every job that’s open, including high school jobs and AAU jobs, my name is mentioned. So, no.” He then added, “I have a great job.” .”

D’Antoni was in the final season of a four-year, $24 million contract. He leaves with a record of 121-167, a mark that largely reflects the Knicks’ messy rebuilding process over his first two years. His best season was in 2010-11, when the Knicks went 42-40, which was their first winning record in 10 years, and made the playoffs. The celebration was short lived, however, as they were swept by the Boston Celtics in the first round.