The LINsanity Picks Up as Jeremy Signs an Offer Sheet with The Houston Rockets ... but The NY Knicks Are Ready To Match! 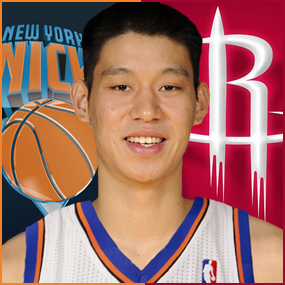 We Told You The NBA Conspiracy Theories Would Be In Full Effect, and Now The Knicks Must Match a 28.8 Million Dollar Offer For Their Overnight Sensation!

It all started with the news that JASON KIDD WAS READY TO TURN DOWN MARK CUBAN’S DALLAS MAVERICKS IN ORDER TO SIGN WITH THE NEW YORK KNICKS. From there, the NBA went into hyper drive, as teams made offers and counter offers, moves and counter moves.

This evening, the big news broke.

According to multiple sources in the know, The Houston Chronicle’s story about Jeremy Lin agreeing to sign a four-year, $28.8 million offer sheet with the Houston Rockets is true. The New York Knicks, however, have already vowed to match any offer Lin receives in order to keep him. The earliest Lin can officially sign the offer sheet is July 11. The Knicks would have three days to match or let him join the Rockets.

Houston’s four-year offer to Jeremy Lin includes a team option in the fourth year. He would make $5 million in year one, $5.2 million in year two and $9.3 million in each of years three and four. The back-loaded offer is designed to hit the Knicks hard on the luxury tax. Say what you want about Houston, they know how to lay out an offer that puts a sting into the potential of a counter.

The Rockets’ offer comes on the same day the team reached agreement to trade point guard Kyle Lowry to the Toronto Raptors for a first-round draft pick. It also comes one day after the Phoenix Suns reached agreement with Goran Dragic on a four-year, $30 million contract. The Rockets stopped bidding on Dragic, refusing to go as far as the Suns did.

The Knicks have publicly and privately indicated they plan to match any offer for Lin.

Besides Lin’s promise as an NBA point guard, his ability to drive revenue for the Knicks, both regionally and internationally, is unprecedented for a player with such a limited body of work. As an Asian-American superstar, Lin’s popularity in the Far East could significantly benefit from him playing in Houston. More so than playing in The Big Apple? Well, perhaps. After all, the Rockets still have great brand recognition in China because of Yao Ming’s career with their team.

The Knicks understand that whatever they pay Lin, and whatever ultimate luxury-tax punishment results from going so far over the salary cap, could still be well worth the cost in terms of China-based revenue.

Lin averaged 14.6 points and 6.2 assists before his season ended with a knee injury in March.

Lin had been in the Rockets’ training camp in the preseason, stuck behind Lowry and Dragic. The Rockets cut him before the start of the season. After Lin exploded into global stardom across several weeks with the Knicks, people wondered how teams like the Golden State Warriors and Rockets ever let him go.

The LINsanity is only going to get crazier in the next few days, and we’re HustleTweeting about it right now. Of course, you’re more than welcome to join the conversation by following the Hustle on Twitter HERE or write to us directly at hustleoncrave@gmail.com  Hey, have you checked out the Hustle’s Ultra High Quality You Tube Channel, with  exclusive videos featuring BROCK LESNAR’S “HERE COMES THE PAIN”  … ICE-T AND COCO’s SEX SECRETS … THE ULTIMATE WELTERWEIGHT BAD ASS NICK DIAZ … CONTROVERSIAL TEEN SENSATION TAYLOR MOMSEN … LEGENDARY MMA PIONEER FRANK SHAMROCK … THE WALKING RIOT MISSY HYATT … if you’re not subscribing, you’re missing something … and by the ways cheapos, it’s FREE! Yes, absolutely 100 percent FREE! What are you waiting for? Check it out HERE!