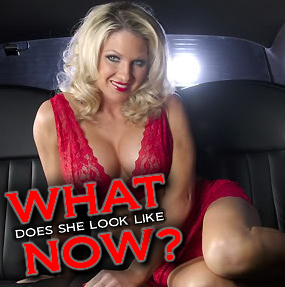 From the moment Jillian Hall walked in the doors of OVW Wrestling in Louisville Kentucky, her strong camera presence and athletic ability guaranteed she’d be a superstar on the WWE roster. Having gained extensive experience throughout the midwest in a number of independent promotions, Jillian arrived in OVW as a young veteran.

After a long and successful run with Tank and Chad Toland (later ridiculously re-named "The Dicks" in the pre-PG era of WWE Smackdown), Jillian was called up to the main roster as an associate of MNM. Debuting as "the hot chick with a grotesque mole on her face," Jillian moved on to an interesting role alongside then-top-star John Bradshaw Layfield aka "JBL." Jillian’s role as JBL’s image consultant resulted into her evolving into a Brooke Hogan / Britney Spears spoof character, singing horribly to the dismay of the WWE Universe. Now, in her very 1st photo session since being released by World Wrestling Entertainment, Jillian poses for THE HEYMAN HUSTLE‘s very own Bob Mulrenin, and the busty blonde bombshell looks like she can still vie for the Divas or Knockouts Championships!

We’re HustleTweeting about Jillian and you’re more than welcome to join the conversation! Follow The Hustle on Twitter HERE or write to us at hustleoncrave@gmail.com