UFC Light Heavyweight Champion Jon Jones Arrested on Suspicion of DUI ... Read What Paul Had To Say To Our HustleTweeters Today About Jones! 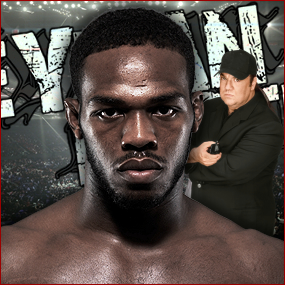 Our Own Hustler De Tuti Hustlers Paul Heyman Jumped Right In And Wasted No Time Offering Some Sage Wisdom To The Embattled Bastion of Integrity For The Ultimate Fighting Championships!

The news hit hard and fast earlier today. UFC Light Heavyweight Champion Jon Jones crashed his brand new Bentley into a pole in Binghamton, New York, and was subsequently arrested and  charged with DWI at around 5:00 am Eastern Time.  Jones’ vehicle struck a telephone pole at the intersection of Grand Boulevard and Helen Street in Binghamton, revealed Sgt. Christopher Lason. No other vehicles involved in the accident, said Lason, who declined to comment on whether there were passengers in the vehicle.

According to Lason, the Bentley’s air bag deployed and Jones suffered a bloody nose, while the car was considered totaled. Jones, who grew up in nearby Endicott, N.Y. currently lives in Ithaca, which is about an hour’s drive from Binghamton. Jones was released after being issued a ticket to appear in court at a later date, the sheriff’s department said.

Malki Kawa, Jones’ manager, issued a statement. “We are asking for fans and media to respect the privacy of Jon and his family during this time.”

The 24 year old sensation has been attempting to land a sponsorship from Nike, while he is the first athlete to officially be sponsored by the UFC itself.

Our own Hustler De Tuti Hustlers Paul Heyman commented on the breaking story early this evening on Twitter, saying “This is where Jon Jones’ team must master getting out in front of a problem. Not to sound cliche-ish, but the ONLY move here is to be PRO-ACTIVE rather than RE-ACTIVE! If a more serious issue has now been uncovered, Jon Jones needs to address it, both personally and professionally, and demonstrate he can handle this setback with the grace and dignity a man of his character demands of himself. Adversity defines ones character, and this is Jon Jones’ first true test.”

Of course, you are invited to join the conversation on Twitter with our legion of HustleTweeters by following the Hustle on Twitter HERE or write to us directly at hustleoncrave@gmail.com  Hey, have you checked out the Hustle’s Ultra High Quality You Tube Channel, with  exclusive videos featuring BROCK LESNAR’S “HERE COMES THE PAIN”  … ICE-T AND COCO’s SEX SECRETS … THE ULTIMATE WELTERWEIGHT BAD ASS NICK DIAZ … CONTROVERSIAL TEEN SENSATION TAYLOR MOMSEN … LEGENDARY MMA PIONEER FRANK SHAMROCK … THE WALKING RIOT MISSY HYATT … if you’re not subscribing, you’re missing something … and by the ways cheapos, it’s FREE! Yes, absolutely 100 percent FREE! What are you waiting for? Check it out HERE!