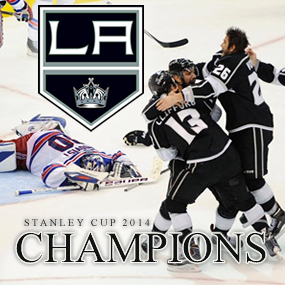 NY Rangers Goaltender Henrik Lundqvist puts on the performance of a lifetime, but the Kings grab the coveted Stanley Cup!

As it turns out, Friday The 13th on the West Coast ended up being the curse of the anniversary on the East Coast. In a strange twist of fate, Saturday the 14th was the 20th anniversary of The New York Rangers winning the Stanley Cup, and since this game went into double overtime, it was already the 14th on the East Coast while the game was being hotly contested on the West Coast, which was still before midnight and therefore Friday the 13th. So, two decades after MARK MESSIER AND THE FAMOUS BLUE SHIRTS  finally halted The New York Rangers’ 54-year championship drought, the Rangers’ hope to repeat history was squashed when Alec Martinez smashed a rebound off the amazing Henrik Lundqvist’s save, and sent the LA Kings into the history books at 14:43 into Double Over Time.

“I knew going into this series it would end in tears. Tears of joy or tears of heartbreak, ” said Lundqvist, who made 48 saves on 51 official shots at the goal. “It’s extremely tough. . . . You look at all three games in this building and we could’ve easily won all three.”

With both teams showing signs of extreme exhaustion, Martinez started the final rush with a pass to Kyle Clifford, who dropped it to Tyler Toffoli for a shot. The rebound went straight to Martinez, and the alert defenseman sent it right past Lundqvist for his fifth goal of the postseason and obviously the most important and celebrated goal of his career.

Martinez is becoming a late-game playoff legend after also scoring in overtime in Game 7 against The Chicago Blackhawks in the Western Conference finals, but the Kings all see themselves as part of something bigger.

” I don’t know if we’re part of (a dynasty) yet, but hopefully we’re on our way to that,”  Kings defenseman Drew Doughty said. ” I believe this group could be at that point, but it’s going to take a lot of work.”

“You go into this hoping that you don’t regret anything,” Rangers coach Alain Vigneault said. ” We put it out there. We gave our best shot, best effort. Three games here all went to OT. What can I say?”

Of course, we’re HustleTweeting about the remarkable performance of Lundqvist and the victory by the opposing Kings, and you’re more than welcome to join the conversation by writing us on twitter HERE or write to us directly at hustleoncrave@gmail.com Hey, have you checked out the Hustle’s Ultra High Quality You Tube Channel, with exclusive videos featuring OUR WORLD EXCLUSIVE WITH MIKE TYSON … BROCK LESNAR’S “HERE COMES THE PAIN” … ICE-T AND COCO’s SEX SECRETS … MMA BAD BOY NICK DIAZ … the list goes on and on, so if you’re not subscribing, you’re missing something … and by the ways cheapos, it’s FREE! Yes, absolutely 100 percent FREE! What are you waiting for? Check it out HERE!