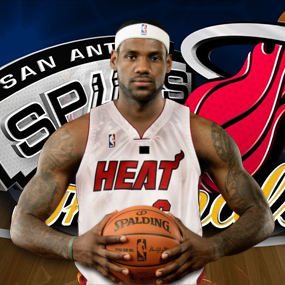 The Spurs Host Miami in a Rematch From Last Year’s Finals!

SPECIAL FOR READERS OF THE HEYMAN HUSTLE: VOTE ON WHO WILL WIN GAME ONE TONIGHT … SPECIAL PRIZES NOW BEING GIVEN AWAY!  SEE THE BOTTOM OF THIS PAGE!

The San Antonio Spurs host the Miami Heat in Game 1 of the 2014 NBA Finals tonight. It’s the much-anticipated rematch from last year’s Finals in which the Heat won the championship in seven exhilarating games. The Spurs have had a remarkable year,making it through the hyper-competitive Western Conference. “We’ve got four more to win. We’ll do it this time.” Tim Duncan said after San Antonio won the Western Conference Finals. “We’re happy that it’s the Heat. We’ve got that bad taste in our mouths still.”

LeBron came back with, “They don’t like us. They don’t. I can sense it from Timmy’s comments over the past couple days… They want us, so they got us.”

LeBron won’t be matched up against Duncan, though. He will be pitted against Kawhi Leonard, one of the league’s premier defensive players. He’ll need to be, as LeBron has been epic when the situation calls for it. But LeBron will probably never forget when he was swept by the Spurs in 2007, who forced him into jumpers and shots he couldn’t hit with regularity. Before the 2013 Finals began, King James admitted “I don’t need any more fuel from losing. I’ve lost two Finals, so I don’t need any more fuel from losing the Finals.“

As the 2013 Finals unfolded, the Spurs dared LeBron to shoot jumpers. “I’m a better player,” LeBron confidently stated, “and you can’t dare me to do anything I don’t want to do in 2013.”

Except that’s exactly what  Kawhi Leonard, Gregg Popovich, and Boris Diaw dared James to do. They wanted him to prove he was the shooter they couldn’t give space to. They wanted him to beat them with his jumper instead of beating them everywhere else  … with his passing, dunks, and by getting to the free-throw line. James eventually gave in and started shooting, and as he got more aggressive, the wins started showing up for the Heat at the most critical times.

In the first three games of the 2013 NBA Finals, LeBron averaged 18 field-goal attempts (38.8 percent) and two free-throw attempts. Miami was 1-2 in those first three games. In the next four games of the series, James stopped feeling out the game so much and started asserting his dominance on the basketball world again. He averaged 24 shot attempts (47.9 percent) and 8.2 free-throw attempts. The Heat won three of those four games and closed out their second successive title.

LeBron and the Heat can’t really afford to wait for him to feel out the game as he likes to do. While it makes for a calmer basketball sense from LeBron and possibly a clearer head, the Spurs are a well-oiled machine that won’t allow many lulls in a game for the Heat to get their bearings. The Spurs are going to come at you with their beautiful, perfect offensive attack that is as selfless as it is lethal. This means LeBron feeling out the game could leave his team in a hole pretty quickly.

It’s important for him to get his teammates involved but it’s also important for him to set the tone early against such a worthy opponent. Not that you need to teach LeBron much at this point, but a shot taken by James is often going to be one of the best options on the floor, but it comes with a balance. If LeBron has options and still chooses to take the shot, it puts the defense on its heels. If the shot is the only option given by the Spurs, it means he’s playing into their hands on some level.

That’s what LeBron being assertive right away and forgoing all of the “feeling out the game” stuff is so necessary for the Heat and their chances in this round. They don’t have home-court advantage. They don’t have Mike Miller for the crazy breakout game. They haven’t consistently shown the crazy defensive intensity they need to employ.

And yet, LeBron can change all of that in one fell swoop. He can decide to dictate the game from the start and make the Spurs adjust to him. He can do exactly what Kevin Durant wasn’t able to do in the previous round against the Spurs. If he does that, we’re more likely to see a replay of the last four games of the 2013 NBA Finals than we are of the first three games, in which the Spurs mostly did what they wanted.

Whether LeBron comes through for his team and whether his team ends up securing the three-peat, the eyes of the world are once again on the biggest star in basketball. And his name is LeBron James!

Of course, we’re HustleTweeting about LeBron James, and you’re more than welcome to join the conversation by writing us on twitter HERE or write to us directly at hustleoncrave@gmail.com Hey, have you checked out the Hustle’s Ultra High Quality You Tube Channel, with exclusive videos featuring OUR WORLD EXCLUSIVE WITH MIKE TYSON … BROCK LESNAR’S “HERE COMES THE PAIN” … ICE-T AND COCO’s SEX SECRETS … MMA BAD BOY NICK DIAZ … the list goes on and on, so if you’re not subscribing, you’re missing something … and by the ways cheapos, it’s FREE! Yes, absolutely 100 percent FREE! What are you waiting for? Check it out HERE!