Paul Heyman: When Legends Meet History, Anything Can Happen 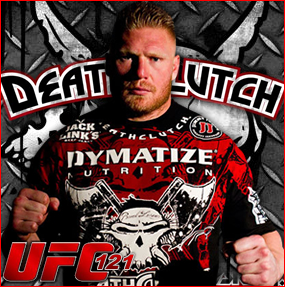 Tonight’s Epic Main Event Between Brock Lesnar and Cain Velasquez at UFC 121 is the Type of Clash of Which Great Films Are Made!

It’s obvious, when you meet Brock Lesnar, that you are in the presence of greatness. A 6’3”, 265+ pound human being is not supposed to possess blinding speed and contortionist-level flexibility, but the former NCAA Divison I Heavyweight Champion from the University of Minnesota is not just any human being. He’s gifted. "Blessed," he’ll tell you (if he’ll talk to you). Truly, a once-in-a-lifetime athlete.

I met Brock Lesnar shortly before Wrestlemania 2002. My first child, Azalea, was still in her mother’s womb. So was Brock’s first child, his daughter, Mya.

Brock had been in the then-developmental territory Ohio Valley Wrestling for over a year. It was time to move him up to the main roster.

I was only behind-the-scenes in WWE. I had successfully navigated my way off television after Survivor Series, but was about to go back on-air as "agent" for Chris Benoit, who was going to turn heel (villain) at Wrestlemania in Toronto.

It was actually Taz who introduced us. Brock was being given lame advice by jealous and envious veterans, and Taz knew it. Even though he was 5’8”, 248 pounds, Taz had convinced the public he was what only Brock could legitimately claim to be. The man with most legitimate claim to being the best fighter in the world.

That meeting changed my life.

I ended up being switched from Benoit to Brock. It turned out to be the biggest on-air break of my career. With the possible exception of the notoriety and recognition that comes along with being the "man behind the curtain at the Original ECW," the on-air association with Brock Lesnar has been what most people know me for.

I’m proud of the fact that away from the spotlight, Brock and I developed a friendship. I am honored to be within the small circle of people with whom he chooses to deal. He’s someone for whom I have a great deal of admiration and respect.

You may think that’s "fight day talk," or some sugarcoated hyperbole on the day of the biggest pay per view event of Twenty Ten. But it’s not. It’s the truth. And I’ll tell you why.

Brock Lesnar is everything he claims to be. He’s a fiercely driven, obsessive athlete who hates losing almost as much as he loves to win. He’s a devoted husband, who does not like to spend any time away from his wife, with whom he has built a life in the middle of nowhere, but to them it’s "home," the greatest place on Earth. He’s a dedicated father, one who adores his children and protects them from the very spotlight that has ruined so many famous people’s offspring. He goes to sleep every night on his own property with the same woman, wakes up next to her every morning, and can’t imagine any life besides that of "Ma and Pa Lesnar, Heads of the Family, Farmers, Just Very Private People."

Brock thrives on competition, but he does so because it invigorates and inspires him to push his gifts/blessings to the absolute limit … and to exploit those talents to provide a better life for his family. He has a larger coaching and training staff than any fighter in UFC history, and the business he has built around himself is predicated on the evolution of a world champion fighter, the best in the world, the #1 pay per view attraction in the universe at this given time.

And yet, as I sit here, trying not to get caught looking across the breakfast table at my friend, the beast, the man, the animalistic competitor, the husband/son/brother/father, I can’t help but think what must be going through his mind.

What did Babe Ruth think hours before the World Series? What was in Michael Jordan’s head right before going into the final game of the NBA Finals? What must it have been like to sit with Muhammad Ali the day of The Thrilla in Manilla?

What must it be like sitting across from Cain Velasquez today?

Hey, I am the first to admit it. I am biased. Brock is not only someone I find mesmerizing as an athlete, but  someone for whom I have an undeniable personal affinity. I am not, however,  blinded by that friendship. I am, bluntly,  in awe of Cain Velasquez. There is no question the undefeated Mexican-American prodigy is, ironically, the UFC’s "Next Big Thing."

And there’s no doubt Cain views Brock as the gatekeeper, the God of War whose throne must be surrendered to the younger, yet more experienced heir to the throne. Eight men have entered a cage fight with Cain Velasquez. Eight professional pugilists whose confidence level was every bit as high as Cain’s. Eight men who had every reason to believe they could stop this Latino juggernaut. Eight men who have trained, prepared, and readied themselves for a mixed martial arts encounter with the opponent with the Biblical name.

To the man, every one of those eight men have fallen.

Cain Velasquez has every reason to be quite confident going into this fight. His training facility? Top notch. His coaches? A-1. His mindset? Ready to become champion.

But then I look across the table, and I see my friend. The most ruthless competitor I have ever met. The most "game day" athlete in the world’s most brutal yet technical sport. The farm boy who has no remorse, and only "kill or be killed" instincts bred into him from the day his father first took him out on the tractor to plow the Lesnar Family’s fields.

Tonight, Brock Lesnar will step into the Octagon against Cain Velasquez. One man is going to win. Either Lesnar will be dethroned, or Cain Velasquez will have to learn, for the first time since college, how to handle the awful, bitter taste of defeat.

There’s no other option in the fight game. The very nature of the battle ensures that someone must lose in order for someone to win. A man has to victimize the other, in order to advance his own cause, his own bank account, his own career.

Marty Morgan has a game plan. Brock Lesnar has, well, he has Brock Lesnar. And all the gifts and lessons and ability that goes along with being Brock Lesnar.

Because tonight, when they lock the doors of the Octagon, and referee Herb Dean asks Brock and Cain "fighter, are you ready?" there’s only one thing Brock Lesnar can rely on. The fact he has what it takes to remain the Undisputed UFC Heavyweight Champion of the World. The Baddest Dude on the Planet.

Because in his mind, those two descriptions only fit one man in the world.

And that man’s name is Brock Lesnar.