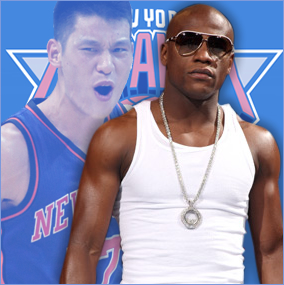 LINsanity continues to dominate the sports headlines in The Big Apple, as the New York Knicks breakout star was nameed the NBA Eastern Conference Player of the Week, the 1st time this season a Knick has won the distinction.

But Jeremy Lin didn’t have much time to celebrate.

Undefeated boxer Floyd “Money” Mayweather has unleashed a whirlwind of controversy this evening by tweeting “Jeremy Lin is a good player, but all the hype is because he’s Asian. Black players do what he does every night and don’t get the same praise.”

Lin, first American-born player of Taiwanese or Chinese descent in NBA history, has become a superstar overnight, helping the Knicks win their last five games — the last three of which have come without stars Carmelo Anthony and Amar’e Stoudemire. Two weeks ago, he was the Knicks’ fourth-string point guard. But the 23-year-old Harvard graduate went on a sudden hot streak — becoming the first NBA player to post at least 20 points and seven assists in his first four careers starts.

In all, he’s scored 109 points over his first four career starts, the most by any player since the NBA and ABA merged in 1976. The Knicks, meanwhile,  tweeted today that Anthony could return “toward the end of the week.” The All-Star has missed three games with a groin injury.

Anthony also said he’s excited to share the court with Lin, despite speculation he might struggle to fit in the Knicks’ new Lin-run offense.

“I know there’s questions about, ‘Can I fit in?’ and stuff like that, but this is like a dream come true to me,” Anthony stated, “It takes some pressure off of me. I don’t have to play point guard. I don’t have to try to get Amar’e 20 points, try to get this guy 20 points, me try to go out there and get 25-30 points a night, play defense, rebound do the whole thing.”

Stoudemire, meanwhile, is set to return Tuesday night against the Toronto Raptors. He missed the last four games after his brother was killed in a car crash in Florida. Stoudmire says Lin’s rise has comforted his family.

“The only positive for us during that whole week was we were watching the basketball games and we were watching Linsanity,” Stoudemire told ESPN.com. “My family was getting a kick out of it. That’s the only smiles they really had all week. It was great to see that. It’s been a tough week.”

CLICK HERE TO READ ABOUT THE “LINSANITY” THAT HAS TAKEN OVER NEW YORK CITY!

Of course, we’re HustleTweeting about the Floyd Mayweather – Jeremy Lin Controversy, and we want your opinion as well! Please feel free to follow THE HEYMAN HUSTLE on Twitter HERE or post your feelings on our Facebook page HERE!