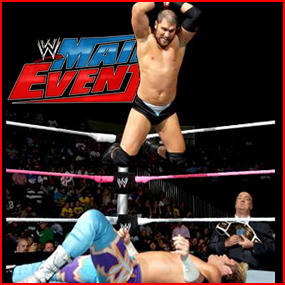 Our very own Hustler De Tuti Hustlers Paul Heyman accompanies his Intercontinental Champion to the ring on ION TV to witness a hard fought victory over Zach Ryder!

WWE Intercontinental Champion Curtis Axel came to WWE Main Event with a mission, and that mission was to make a statement. The #BetterThanPerfect IC Title holder was a driven, determined champion against Long Island’s contribution to the WWE Universe, as reported on WWE.com:

Former United States Champion Zack Ryder hoped to score an upset victory in Baton Rouge by battling Intercontinental Champion Curtis Axel. Relying on his athleticism and support from the WWE Universe, Ryder managed to keep the third-generation Superstar off-balance early in the contest.

With Paul Heyman clutching the Intercontinental Championship and offering words of encouragement for his “guy,” Axel managed to rebound and keep Ryder at bay. Unable to reassert his offense, Long Island Iced- Z was ultimately defeated when Axel managed to execute his patented neckbreaker.

Of course, we’re HustleTweeting about Curtis Axel, and you’re more than welcome to join our conversation by following THE HEYMAN HUSTLE and telling us what YOU think RIGHT F’N HERE! We got the whole social media thing covered, so check out the Hustle’s Ultra High Quality You Tube Channel, with exclusive videos featuring OUR WORLD EXCLUSIVE WITH MIKE TYSON … BROCK LESNAR’S “HERE COMES THE PAIN” … ICE-T AND COCO’s SEX SECRETS … TEEN SENSATION TAYLOR MOMSEN … UFC BAD BOY NICK DIAZ … THE WALKING RIOT MISSY HYATT if you’re not subscribing, you’re missing something … and by the ways cheapos, it’s FREE! Yes, absolutely 100 percent FREE! What are you waiting for? Check it out HERE!

CLICK ON THE PICS BELOW TO SEE THE ENTIRE OFFICIAL WWE PHOTO
GALLERY FEATURING CURTIS AXEL VERSUS ZACH RYDER ON MAIN EVENT!