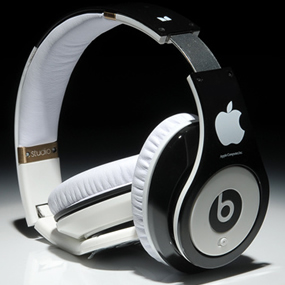 When Billions Are on The Table, Everyone Wants A Slice of Apple Pie!

The Hollywood Reporter has posted an EXCLUSIVE story regarding a major lawsuit that could make Beats Music’s bite of the Apple pie just a little bit bitter. In the report, THR reports:

Former hedge-fund manager Steven Lamar fired a legal salvo aimed at Dr. Dre,Jimmy Iovine and others with claims of breach of contract and demands to be paid as much as four percent of royalties on headphone sales. Lamar’s cross-complaint comes in the midst of a dispute that popped up in Los Angeles Superior Court this past January after seven years of peace between the parties.

In 2006, Lamar was president of SLS International when he says he took his concept for celebrity musical artist-endorsed headphones to Iovine, the co-founder of Interscope Records.

“Lamar’s concept envisioned a partnership between technology that would provide a superior audio experience and an iconic product design and brand identity promoted by a well-known and respected music artist,” says Lamar’s cross-complaint. “Iovine proposed that Dre be the celebrity musical artist to endorse the headphones.”

Lamar then says he engaged Pentagram, a California-based firm to design a line of headphones. There, he worked with a man by the name of Robert Brunner. Lamar also says he identified a Chinese manufacturing partner and in May, 2006, got introduced by Iovine to Jerry McDougal at Apple.

“The proposal was to sell Beats Headphones in Apple stores,” continues the cross-complaint, unintentionally foreshadowing the Beats-Apple discussions years later. “McDougal was so interested in the Beats Headphones that he introduced Lamar to Don Inmon of Apple who was responsible for product placement in stores. Inmon worked with Lamar and others to ensure the packaging sized for Beats Headphones was compatible for Apple retail stores.”

Ultimately, Beats decided to go with Monster, LLC as its distribution partner. According to Lamar’s legal filing, at the time, Iovine and Dre were to get a 20 percent royalty and Lamar/Jibe a five percent royalty.

But then in July, 2006, Dre and Iovine filed a lawsuit against Pentagram, Lamar, Jibe and SLS over Beats. The defendants were accused of failing to perform under a contract and intending to come out with their own “Beats” headphones without Dre’s involvement.

The ’06 lawsuit, though, was quickly settled. Per the terms, Iovine and Dre agreed to pay a four percent royalty on certain headphones to the defendants. Which headphones? That might be under some contention, but roughly those that had been designed by Pentagram or sold by Monster. Pentagram and Lamar were to split their royalty share. Notwithstanding that, Lamar now claims that “Brunner surreptitiously negotiated a separate agreement with Iovine, Dre, and/or Beats Electronics” and “effectively cut Jibe and Lamar out of the royalty stream.”

In the January lawsuit filed by Hinrichs & Associates, a tax and auditing firm assigned Pentagram’s rights, it was said that Lamar wanted not just royalties on one version of the headphones, but also later, “substantially similar,” versions.

Lamar’s cross-complaint puts it a little differently, saying that Pentagram and H&A have collected payments on one model while receiving monetary compensation from Beats for other so-called “covered headphones.”

So now the self-professed founder of Beats is suing Iovine, Dre, Beats, Pentagram and H&A for breaching the terms of the settlement agreement and royalty agreement. He’s suing the same parties for bad faith denial of contract; suing Brunner, Pentagram and H&A for breach of fiduciary duties; and suing Brunner for tortious interference for allegedly inducing Iovine/Dre/Beats to renege on their contractual obligations made eight years ago.

CLICK HERE TO READ ALL ABOUT MUSIC MOGUL JIMMY IOVINE BEING A “PAUL HEYMAN GUY!”

Of course, we’re HustleTweeting about Beats Music and Apple and this latest twist in the future of music, and you’re more than welcome to join the conversation by writing us on twitter HERE or write to us directly at hustleoncrave@gmail.com Hey, have you checked out the Hustle’s Ultra High Quality You Tube Channel, with exclusive videos featuring OUR WORLD EXCLUSIVE WITH MIKE TYSON … BROCK LESNAR’S “HERE COMES THE PAIN” … ICE-T AND COCO’s SEX SECRETS … MMA BAD BOY NICK DIAZ … the list goes on and on, so if you’re not subscribing, you’re missing something … and by the ways cheapos, it’s FREE! Yes, absolutely 100 percent FREE! What are you waiting for? Check it out HERE!