Meet The Next Big Thing in MLB: Yoan Moncada 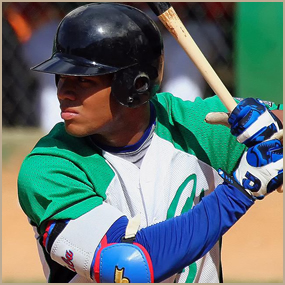 The 19 Year Old From Cuba is About To Become The Hottest Free Agent in Baseball!

Multiple sources have confirmed to THE HEYMAN HUSTLE that Yoan Moncada is going to be officially declared a “free agent” by Major League Baseball, as the league has overhauled its rules regarding Cuban players, paving the way for a bidding war to sign the 19-year-old infielder. THE HEYMAN HUSTLE has also confirmed that players who present sworn affidavits to Major League Baseball stating they are residents of another country, have no intention of returning to Cuba and are not Cuban government officials can sign with major league teams immediately. There are multiple reports and confirmations we have obtained that tell us MLB distributed a memo to teams Tuesday afternoon outlining the changes.

Previously, the league required a specific unblocking license from the Office of Foreign Assets Control. Recent changes in the United States Government’s policy regarding Cuba prompted OFAC to no longer issue specific licenses in cases where the person fulfilled the criteria for a general unblocking license … such as permanent residency in a third country.

It has been widely reported that Yoan Moncada left Cuba for Guatemala, where he obtained multiple documents showing his permanent residency. We’ve learned and confirmed that included in the league’s memo is specific language a team can use in an affidavit, which the player will file prior to his signing.  In addition to Moncada, second basemen Andy Ibanez and Hector Olivera would be eligible to sign immediately.

But clearly, the top star of the bunch is Yoan Moncada, the 19 year old sensation who has every big name team gearing up for their high-dollar pitch. Of course, we’re HustleTweeting about Yoan Moncada, and you’re more than welcome to join the conversation by following the Hustle on Twitter HERE or write to us directly at hustleoncrave@gmail.com Hey, have you checked out the Hustle’s Ultra High Quality You Tube Channel, with exclusive videos featuring OUR WORLD EXCLUSIVE WITH MIKE TYSON … BROCK LESNAR’S “HERE COMES THE PAIN” … ICE-T AND COCO’s SEX SECRETS … MMA BAD BOY NICK DIAZ … the list goes on and on, so if you’re not subscribing, you’re missing something … and by the ways cheapos, it’s FREE! Yes, absolutely 100 percent FREE! What are you waiting for? Check it out HERE!