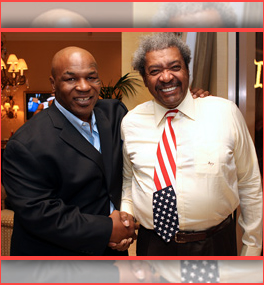 Boxing’s most successful fighter-promoter combination has reunited, and it seems like old times already!

Mike Tyson, who has been on a whirlwind tour promoting the new James Toback documentary on “Iron Mike,” has reunited in spectacular fashion with the boxing promoter who handled “The Baddest Man On The Planet” during the glory days, Don King.

King, now 78 years old, has hired Tyson to provide color commentary on the Internet Pay Per View King is promoting tonight on DonKingTV.com

King’s “Halloween Thrilla” fight card takes place tonight, Halloween night, from the Treasure Island Hotel & Casino in Las Vegas, and is being offered on King’s own Internet PPV feed for $5.99

The legendary former undisputed heavyweight champion, whose greatest years were spent with King, was the youngest man to win the WBC, WBA and IBF world titles. Tyson went on to become one of best heavyweight boxers in history.

“Oh what a glorious day,” said King. “My prodigal son has returned. It may be Halloween, but this is no trick. This will be a treat for boxing fans around the world. Mike is more than one of the greatest heavyweight champions in boxing history. He is a boxing historian, and nobody can break a fight down like Iron Mike.”

The video, shot earlier today, is disturbing to say the least. A humble (or humbled) Tyson, obviously uncomfortable with being back in the spotlight in this fashion, is pimped by King during a walk through the Treasure Island Hotel and Casino. King, trying to garner interest in his Internet Pay Per View presentation, keeps screaming out “Mike Tyson! It’s Mike Tyson!”

The two have come a long way since Tyson described King as a “wretched, slimy, reptilian motherfucker. This is supposed to be my black brother right? He’s just a bad man, a really bad man. He would kill his mother for a dollar. He’s ruthless, he’s deplorable, he doesn’t know how to love anybody.”

Time, it seems, heals all wounds. It also leaves the once-victimized open for brand new fresh wounds, too.

MANY MORE PICS BELOW AND ON THE PAGES
THAT FOLLOW, INCLUDING CLASSICS FROM “THE
GLORY DAYS.” HERE’S A VIDEO FROM EARLIER TODAY
OF TYSON AND KING TAKING A PROMOTIONAL STROLL IN VEGAS 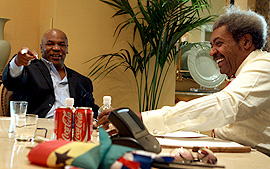