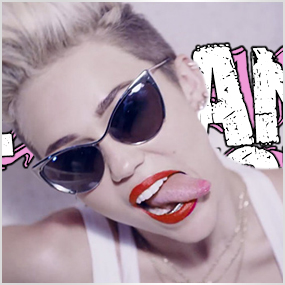 In fact, we think she’s just getting started!

Miley Cyrus collaborator, the man described by The New York Times as Miley’s “artistic enabler” has sent shockwaves through the media by announcing his band, The Flaming Lips is planning a special event in honor of a track off Miley’s fifth album, “Miley Cyrus & Her Dead Petz” … and the event, a concert, will take place with the artists involved (and yes, that includes Miley) will be performing in the nude.

Noted Coyne: “Oh fuck..!!! @mileycyrus is planning a show where her, the band (us) and the audience are all COMPLETELY naked with milk (well white stuff that looks like milk) is being being spewed everywhere . . . It’s a video ( in the works) for #mileycyrusandherdeadpetz song “The Milky Milky Milk.”

Cyrus has not confirmed the naked concert, but she did announce that she will tour for the album alongside The Flaming Lips, with a show in Detroit planned for November 21. We need to get some of our best Hustle photographers over to that event ASAP!  Miley has been collaborating a lot lately with Coyne, whom she described to the Times as (and this a direct quote, lifted verbatim from the story) “He’s everything in the world … you can’t even define us . . . I am 100 percent in love with Wayne, and Wayne is in love with me, but it’s nothing sexual in any way. That would be the grossest.”

Of course, we’re HustleTweeting about Miley Cyrus (when are we not?), and you’re more than welcome to join the conversation by following the Hustle on Twitter HERE or write to us directly at hustleoncrave@gmail.com Hey, have you checked out the Hustle’s Ultra High Quality You Tube Channel, with exclusive videos featuring the #HUSTLEBOOTYTEMPTATS SUPERMODEL OF THE YEAR … OUR WORLD EXCLUSIVE WITH MIKE TYSON … BROCK LESNAR’S “HERE COMES THE PAIN” … ICE-T AND COCO’s SEX SECRETS … MMA BAD BOY NICK DIAZ … the list goes on and on, so if you’re not subscribing, you’re missing something … and by the ways cheapos, it’s FREE! Yes, absolutely 100 percent FREE! What are you waiting for? Check it out HERE

CLICK ON THE PICS BELOW TO SEE THE ENTIRE HUSTLE GALLERY FEATURING THE ALWAYS-IN-THE-NEWS MILEY CYRUS!