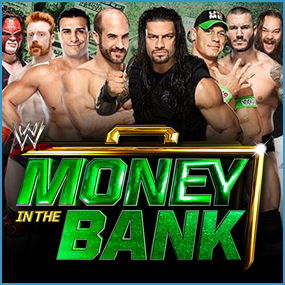 It was a historic night in Boston, as the unified world titles went to hometown boy John Cena in a thrilling ladder match. According to WWE.com:

With the wreckage of Cesaro, Bray Wyatt, Roman Reigns, Alberto Del Rio, Sheamus, Kane and a bloody Randy Orton surrounding him, John Cena scaled the rungs and notched the latest and potentially greatest of his historic victories to claim the vacant WWE World Heavyweight Championship in the first-ever Ladder Match to put the unified title up for grabs.

That WWE COO Triple H and WWE Principal Owner Stephanie McMahon were ringside to witness The Champ’s ultimate triumph must have just been icing on the cake for Cena, who came out on the wrong side of history when the two World Titles were first unified at WWE TLC last December. As long as Cena’s list of championship wins is, this one was particularly impressive given that The Authority had not one but two representatives in the bout, and one of them – Kane – wasn’t so much a contestant in the classic sense as an insurance policy to make sure Orton was victorious again.

The bout that ultimately saw Cena anointed as the Champion of Champions did not immediately take on the chaotic atmosphere of the evening’s first Ladder Match for the Money in the Bank Contract, where bodies were sent soaring within moments of the opening bell. Instead, the eight Superstars in the main event mostly paired off into their recent rivalries, with Cena making a beeline for Wyatt and Cesaro grappling with Del Rio over control of a ladder. It didn’t take long for the battle lines to become blurred, though, with Bray hurling his body into said ladder, taking down both The King of Swing and The Essence of Excellence in one fell swoop.

Sheamus became the first man to lay hands on the two titles, although Kane quickly cleared the way for Orton to make a run up the rungs. Roman Reigns quickly answered, knocking Orton off his perch from halfway up the ladder. Adding insult to injury, The Apex Predator caught a blow to the head on the way down, rendering him bloody on the outside.

The former WWE World Heavyweight Champion made a speedy recovery though, reasserting himself after a precarious episode where Cesaro – dangling by one arm from one of the suspended championships – sent a similarly suspended Sheamus down to the canvas. After disposing of both Del Rio and the Irishman on the outside, The Apex Predator made his first genuine play to grab the titles, but unfortunately for him, the ring filled up in a matter of moments and a “mad scramble,” as Michael Cole called it, ensured for the WWE World Heavyweight Championship.

Yet again, Kane proved himself to be The Authority’s most valuable asset in the contest by clearing the ring, but The Devil’s Favorite Demon ran into  Sheamus before he could assist Orton. Kane suffered Ten Beats of the Bodhrán for his efforts, though the Irishman’s own dominance was short-lived and it was soon Cesaro’s turn to make another play for the titles. The King of Swing proved himself worthy of Paul Heyman’s representation by horizontally threading a ladder from the turnbuckle through the rungs of a vertical one (Swiss engineering at its finest) to create a steel-frame, house-like structure upon which he once again grappled over the titles with the resilient Sheamus.

With the house of ladders literally teetering on the brink of collapse, Cesaro and Sheamus traded blows within reach of the titles until Cena literally righted the ship … at which point Kane, once again, took out all opposition. Reigns unleashed his biggest effort at this point, hurling his body beneath the rungs to Spear Kane in two – so much for superstition – and summarily cleaning house, Spearing and Superman punching everything in sight … except for John Cena, who found himself face-to-face with Reigns in an empty ring and a roaring WWE Universe foaming for the fight.

The first face-off between the present and future standard-bearers of WWE ended in a decisive advantage for Reigns, who broke free of the Attitude Adjustment and ricocheted off the ropes seamlessly into a Spear. Roman’s seemingly preordained destiny to climb the ladder was delayed once again, however, by Orton, who wrenched the big dog off the rungs into a backbreaker.

It was at this point, though, that every Superstar decided to make their big plays for victory, with the result resembling something of a 12-car pileup. First, Wyatt stormed the ring and drove Orton to the mat with Sister Abigail; Del Rio stopped him moments later with a kick to the face and was repaid moments later by Sheamus, who Brogue Kicked The Essence of Excellence into a stupor. Sheamus’ own attempt to climb the ladder was cut short yetagainby Cesaro, who sent him tumbling into a European uppercut; Orton then stopped The Swiss Superman from winning by swinging him off the ladder into an RKO.

The Apex Predator ascended the ladder once again and Reigns made his final play to cut his budding rival off at the pass. For a moment, it seemed like the former WWE Tag Team Champion had made good on his promise to become the Champion of Champions when he knocked The Viper off the ladder, but Kane yet again proved himself worthy of The Authority’s trust when he removed Reigns from the equation with a Chokeslam.

It was then that Cena seized the opportunity fate had presented him. With Kane and Orton alone in the ring and the titles ripe for the Viper’s taking, the Cenation leader made his play. First, he AA’ed an unsuspecting Kane and then delivered his signature maneuver to Orton, slamming The Apex Predator on top of Kane’s prone body for good measure before climbing the ladders and unhooking the WWE World Heavyweight Championship for his 15th World Championship reign.

And what a reaction he got from ringside: The Game, who had stacked the deck and rigged the odds in every way imaginable, nearly tore off his tie in frustration. Stephanie McMahon’s jaw all but hit the floor. John Cena scaled the turnbuckles with the two titles in hand – the very outcome The Authority had worked so hard to avoid all those months ago – and mocked them with the “You Can’t See Me” hand gesture. Of course, they could see him. In fact, if the trend holds, they’ll be seeing it for a long, long time to come, whether they like it or not. The Champ is here.

Of course, we’re HustleTweeting about Money in the Bank, and join the conversation by writing us on twitter HERE or write to us directly at hustleoncrave@gmail.com Hey, have you checked out the Hustle’s Ultra High Quality You Tube Channel, with exclusive videos featuring OUR WORLD EXCLUSIVE WITH MIKE TYSON … BROCK LESNAR’S “HERE COMES THE PAIN” … ICE-T AND COCO’s SEX SECRETS … MMA BAD BOY NICK DIAZ … the list goes on and on, so if you’re not subscribing, you’re missing something … and by the ways cheapos, it’s FREE! Yes, absolutely 100 percent FREE! What are you waiting for? Check it out HERE!