Gabe Sapolsky: The Hottest New Wrestling Stars in 2011 Will Be ... 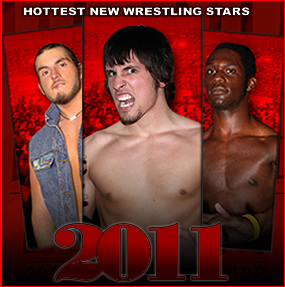 In the legendary words of Wildfire Tommy Rich, I was fired up!

When I wrote MY PREVIOUS BLOG FOR THE HEYMAN HUSTLE, I had an adrenaline rush that kept me going through the entire weekend as Dragon Gate USA presented its final events of the year. One of those events, of course, was our first live Internet Pay Per View (iPPV) on GoFightLive.tv.

The weekend was filled with positives, but unfortunately we were hit with one big negative. Paul Heyman always taught me that it comes to booking talent, you have to accentuate the positives and hide the negatives. I’ll apply that rule to this blog and save the negative until just before the end.

Hope you enjoy that cliffhanger!

I had a blast producing our first live iPPV "Bushido: Code Of The Warrior" a week and a half ago. It was a roller coaster ride of emotions from start-to-finish. The very professional Top Rope Promotions did an excellent job setting us up with the kind of classic venue I love … a PAL Hall that had to be around 100 years old. The character of older buildings really captures me. If you gave this venue a coat of paint it would be the perfect wrestling building.

The day itself was hectic. There was a lot more to do than a typical show. There was a whole new set of equipment. There were live backstage promos. There was a more detailed script than usual,and more people had to know about it. There were even some ridiculous arguments. It could have been overwhelming, but I felt great. This was fun. This felt like something I should be doing.

The live broadcast began with a hot opening "Freestyle" match with Arik Cannon, Ricochet, Johnny Gargano and Chuck Taylor. Half of me was enjoying the action while the other half was thinking through all the cues and if everyone knew everything they needed to know. Then my biggest fear became a reality.

I heard someone say "the audio is off!"

Immediately, the stream became choppy. I knew what this meant. Those viewing at home would be taken out of the mindset of enjoying the show. They would be angry. We were now in a hole with them and would have to win them back. This wasn’t anyone’s fault, but that didn’t really matter, did it? We had a major problem, all because of a blown fuse.

We were in an old building. Lesson learned.

The Go Fight Live crew showed poise in getting everything back in gear quickly. By the way, time for a cheap plug here.

All technical issues are fixed on the  replays of the show, which are available on demand at GoFightLive.tv. As a matter of fact, it’s available right now. What are you waiting for? Except, of course, to finish reading this blog (and look at all the other stories here on the Hustle)?

OK, back to our story.

I could let out a big breath and watch everything unfold. We were all very happy with how the main storyline of the night played out which saw  Chuck Taylor, Johnny Gargano and Rich Swann form their own stable called Ronin. If you told me a year ago that three relative unknowns on the national scene would be in the big angle on our first live broadcast, I would have thought you were crazy.

The past year has seen Taylor, Gargano and Swann all emerge and make the most of every opportunity they were given. They each earned their push with hard work, dedication and the fact that they proved to be winning players. All three, collectively and individually, can be trusted to deliver. All three are immensely talented and dynamic performers.  All three are just so exciting to watch. In my opinion Chuck Taylor, Johnny Gargano, and Rich Swann are three workers ready to make 2011 their year.

I could write a book on the entire experience. Sumo legend Akebono was fun both in the ring and backstage. It was awesome to work with Homicide and Austin Aries again. Jimmy Jacobs and Jon Moxley proved that you can put on a gritty, intense hardcore match without being stupid. Of course, the Dragon Gate stars showed why they are the best in the world at cutting-edge, athletic wrestling. Don’t take my word for it, go watch Shingo vs. BxB Hulk and CIMA & Genki Horiguchi vs. YAMATO & Akira Tozawa on the iPPV.

Cheap plug time. The replays are available on demand at GoFightLive.tv. As a matter of fact, it’s available right now. What are you waiting for? Except, of course, oh you know the rest. Let’s get back to our story.

With the iPPV behind us, we then headed to Rahway, New Jersey. What a smooth event. The Masato Yoshino vs YAMATO main event was great. I was so pleased because even before that great main event got into the ring, I felt we had given the audience a tremendous card of action. This meant I could just take a seat in the crowd, watch and enjoy two elite talents displaying their craft at peak performance.

I was feeling especially relaxed and happy because Taylor, Gargano and Swann all once again made the most of a bigger opportunity to produce an electrifying semi-main event six man tag against veterans Austin Aries, Genki Horiguchi and the newest breakout star Ricochet. We now have Ronin as a strong, fresh, exciting stable heading into 2011.

So, what went wrong?