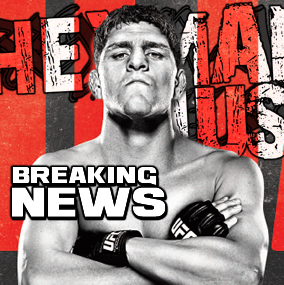 In the continuing saga that never seems to have more wrinkles to it than a fantastic soap opera, THE REMATCH BETWEEN NICK DIAZ AND INTERIM UFC WELTERWEIGHT CHAMPION CARLOS CONDIT is off, and there’s no way it’s going to be “back on” anytime soon.

Diaz, who rose to main event prominence in the StrikeForce promotion and then made a triumphant return to UFC by demolishing the legendary BJ Penn,was the subject of an announcement today by Nevada State Athletic Commission Executive Director Keith Kizer, who stated Diaz tested positive for marijuana metabolites following his controversial five-round clash with Condit, the former WEC Welterweight king Condit at this past Saturday night’s UFC 143 event.

Diaz will ultimately have to appear before the NSAC to address the failed drug screening. It is not known whether or not Diaz will appeal the decision. Unless there is a successful appeal, this marijuana metabolite offense will serve as Diaz’s second infraction under the NSAC’s watch. Diaz also tested positive for marijuana following a 2007 win over Takanori Gomi at PRIDE 33. Diaz was suspended for six months for that  drug testingoffense, and the result of the fight was officially changed to a no-contest.

This past Saturday night at UFC 143, which was held at the Mandalay Bay Events Center in Las Vegas, Condit earned a unanimous decision over Diaz to become the UFC Interim Welterweight Champion, which puts him in line for a Title Unification Fight with Georges St-Pierre sometime this year.

In a post-fight interview with Joe Rogan, an angry Diaz said “I don’t need this shit,” and stated he would retire. UFC President Dana White, while filming THE ULTIMATE FIGHTER: BRAZIL tried to put together a rematch, but now those plans have obviously fallen through. Neither Diaz nor his trainer Cesar Gracie have commented on the test result as of this posting.

We’re HustleTweeting about Nick Diaz, and you’re more than welcome to join the conversation by following THE HEYMAN HUSTLE on Twitter HERE or write to us directly at hustleoncrave@gmail.com  Hey, have you checked out the Hustle’s Ultra High Quality You Tube Channel, with  exclusive videos featuring BROCK LESNAR’S “HERE COMES THE PAIN”  … ICE-T AND COCO’s SEX SECRETS … THE ULTIMATE WELTERWEIGHT BAD ASS NICK DIAZ … CONTROVERSIAL TEEN SENSATION TAYLOR MOMSEN … LEGENDARY MMA PIONEER FRANK SHAMROCK … THE WALKING RIOT MISSY HYATT … if you’re not subscribing, you’re missing something … and by the ways cheapos, it’s FREE! Yes, absolutely 100 percent FREE! What are you waiting for? Check it out HERE!