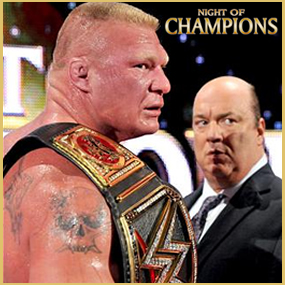 Full Coverage of The Beast Incarnate’s First Title Defense … What Will Paul Heyman Say To The Authority?

WWE Night of Champions was main evented by BROCK LESNAR’s very first title defense in this reign as WWE World Heavyweight Champion, and the controversy coming out of the match has surpassed the wild speculation going into it! According to WWE.com:

NASHVILLE, Tenn. — John Cena brought the fight to WWE World Heavyweight Champion Brock Lesnar like never before at Night of Champions. Yet despite the Cenation leader’s near-superhuman tenacity against The Beast Incarnate in this massive SummerSlam rematch, redemption slipped through his fingers. Shockingly, it wasn’t Lesnar that would be his undoing.

Since Cena’s crushing defeat at SummerSlam that saw him fall victim to 16 suplexes and two F-5s, the indomitable Superstar has gone into overdrive, determined to match WWE’s most dominant force with some newfound intensity of his own. Shortly after the opening bell of this titanic Night of Champions main event, it was almost hard to believe that the muscled juggernaut pummeling Lesnar was the same guy who could be found smiling at us from the Fruity Pebbles box or solving animated mysteries with Scooby Doo. Cena had become a destroyer, and if you looked close enough at Lesnar’s face during Cena’s early Attitude Adjustment, you might have noticed something that resembled doubt in The Conqueror’s eyes.

But then Lesnar kicked out. At the count of one. Things got uglier from there.

Of course, we’re HustleTweeting about WWE Night of Champions, and you’re more than welcome to join the conversation by following us on twitter HERE or write to us directly at hustleoncrave@gmail.com Hey, have you checked out the Hustle’s Ultra High Quality You Tube Channel, with exclusive videos featuring OUR WORLD EXCLUSIVE WITH MIKE TYSON … BROCK LESNAR’S “HERE COMES THE PAIN” … ICE-T AND COCO’s SEX SECRETS … MMA BAD BOY NICK DIAZ … the list goes on and on, so if you’re not subscribing, you’re missing something … and by the ways cheapos, it’s FREE! Yes, absolutely 100 percent FREE! What are you waiting for? Check it out HERE!

CLICK ON THE PICS BELOW TO SEE THE ENTIRE OFFICIAL WWE
PHOTO GALLERY FEATURING BROCK LESNAR VS JOHN CENA!