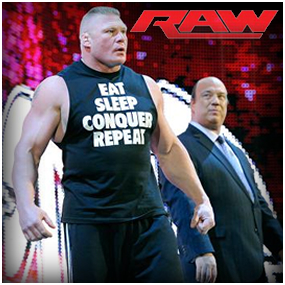 Well things certainly got hot on WWE Monday Night RAW as our boss Paul Heyman advocated a position for his client Brock Lesnar … and the message was clear. After BROCK PULVERIZED THE BIG SHOW at the WWE Royal Rumble pay per view, it was time for The Beast Incarnate to challenge Orton … or Batista … whichever superstar WWE wanted to hand over to Brock! According to WWE.com:

It ain’t easy being The Face of WWE: Lots of people are looking to give you a big black eye. That’s the lesson Randy Orton was reminded of on Monday night, when the Champion of Champions found himself in the sights of both his current No. 1 contender, Batista, and Brock Lesnar, his self-proclaimed No. 1 contender. With both The Animal and The Anomaly laying claim to Orton’s WWE World Heavyweight Championship, it was Raw GM Brad Maddox and The Authority who were ultimately left to make the impossible choice of informing Lesnar whether or not his demands for a title match would be honored … or if Lesnar would be placed into a match against Batista. Judging by his reaction Orton seemed to figure he’d get the worst of that arrangement either way.

Of course, we’re HustleTweeting about Brock Lesnar and Paul Heyman, and you’re more than welcome to join the conversation by following THE HEYMAN HUSTLE on Twitter HERE or write to us directly at hustleoncrave@gmail.com  Hey, have you checked out the Hustle’s Ultra High Quality You Tube Channel, with exclusive videos featuring OUR WORLD EXCLUSIVE WITH MIKE TYSON … BROCK LESNAR’S “HERE COMES THE PAIN” … ICE-T AND COCO’s SEX SECRETS … MMA BAD BOY NICK DIAZ … the list goes on and on, so if you’re not subscribing, you’re missing something … and by the ways cheapos, it’s FREE! Yes, absolutely 100 percent FREE! What are you waiting for? Check it out HERE! 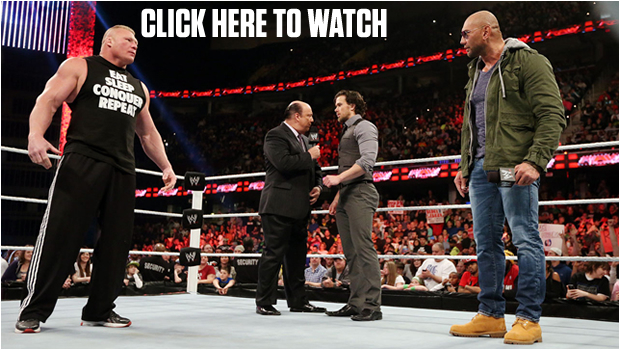