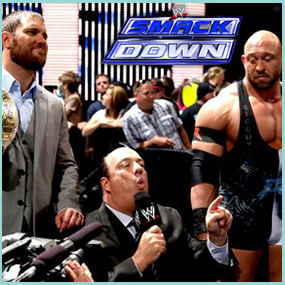 Our very own Hustler De Tuti Hustlers is still wheelchair-bound, but his admiration for Ryback grows with every passing day!

Ryback wrestled his first match since PAUL HEYMAN VS CM PUNK AT WWE NIGHT OF CHAMPIONS but the powerhouse from Las Vegas had a little extra motivation in the form of a Paul Heyman pep talk before his match. According to WWE.com:

Echoing his comments four days earlier on Raw, Paul Heyman once again labeled himself the “Best in the World” for defeating CM Punk at Night of Champions – a feat he credited his “hero,” Ryback, for helping to make possible.

The “Big Guy” opted to add his two cents as well, accusing both The Second City Saint and his imminent opponent in the ring of being bullies. He then put his mayhem where his mouth was, destroying the local competitor with Shell Shocked.

Of course, we’re HustleTweeting about Ryback, and you’re more than welcome to follow THE HEYMAN HUSTLE on the soon-to-be-publicly-traded Twitter HERE or write us directly at hustleoncrave@gmail.com  Hey, have you checked out the Hustle’s Ultra High Quality You Tube Channel, with exclusive videos featuring OUR WORLD EXCLUSIVE WITH MIKE TYSON … BROCK LESNAR’S “HERE COMES THE PAIN” … ICE-T AND COCO’s SEX SECRETS … TEEN SENSATION TAYLOR MOMSEN … UFC BAD BOY NICK DIAZ … THE WALKING RIOT MISSY HYATT if you’re not subscribing, you’re missing something … and by the ways cheapos, it’s FREE! Yes, absolutely 100 percent FREE! What are you waiting for? Check it out HERE!

CLICK ON THE PICS BELOW FOR ALL THE ACTION FROM WWE SMACKDOWN!