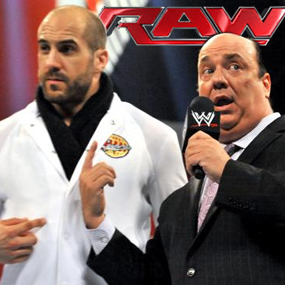 “I’M NOT YOUR QUEEN FINALLY DYING AND CHARLES BECOMING KING …. I’M THE UNDERTAKER AT WRESTLEMANIA!”

This is one we can’t even begin to describe. You just have to watch this video. Nothing else we can say here will do this one justice. A quick recap from WWE.com if you want to understand the amazing footage you’re about to watch:

Add the U.K. to the list of Paul Heyman’s conquered territories; not only did his client Cesaro knock off U.S. Champion Sheamus, but The King of Swing may have accomplished a feat that’s even more impressive: He got under Sheamus’ skin.

Cesaro wisely retreated to the outside each time Sheamus started to roll, though an early Ten Beats of the Bodhrán left The Swiss Superman stumbling straight into the Irishman’s waiting fists. Cesaro used Sheamus’ own momentum to send him flying through the ropes and then turned the tide, tossing his opponent through the ropes in an evidently successful attempt at demoralization: The enraged champion surged to the advantage and was so dead-set on destruction that a distraction from Heyman left him open to a German suplex pin from Cesaro, who couldn’t even be bothered to take up his foe on a sportsmanlike handshake.

Of course, we’re HustleTweeting about RAW from the UK, and you’re more than welcome to join the conversation by writing us on twitter HERE or write to us directly at hustleoncrave@gmail.com Hey, have you checked out the Hustle’s Ultra High Quality You Tube Channel, with exclusive videos featuring OUR WORLD EXCLUSIVE WITH MIKE TYSON … BROCK LESNAR’S “HERE COMES THE PAIN” … ICE-T AND COCO’s SEX SECRETS … MMA BAD BOY NICK DIAZ … the list goes on and on, so if you’re not subscribing, you’re missing something … and by the ways cheapos, it’s FREE! Yes, absolutely 100 percent FREE! What are you waiting for? Check it out HERE! 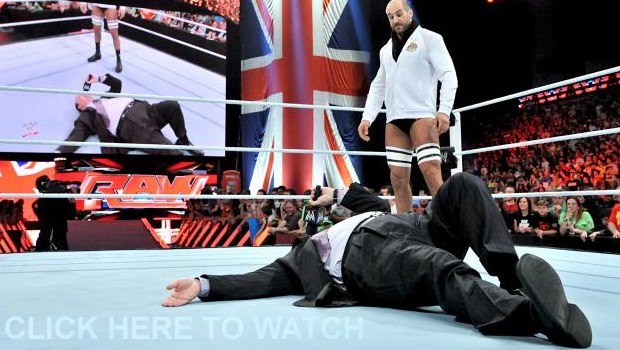