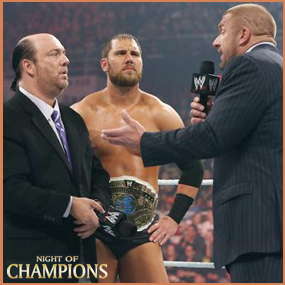 Our very own Hustler De Tuti Hustlers comes to the ring, and tries to get out of the Handicap Elimination Match with CM Punk!

Will Paul Heyman’s career end in Detroit, Michigan? Ever since WWE MONEY IN THE BANK it has appeared as though our boss is living on borrowed time, as CM Punk’s thirst for revenge gets closer and closer to being satisfied. When you consider the fact PAUL HEYMAN’S INVOLVEMENT HELPED BROCK LESNAR DEFEAT CM PUNK AT SUMMER SLAM and couple that with THE VICIOUS CANING OF CM PUNK you know this won’t end pretty. According to WWE.com:

DETROIT — Interrupting Triple H as he welcomed the WWE Universe to Night of Champions at first seemed to be a gross miscalculation by Paul Heyman and Intercontinental Champion Curtis Axel –  as a result, The Game ordered Axel into an impromptu title defense against former Intercontinental and United States Title holder Kofi Kingston. Nevertheless, Axel proved his worth as a champion by overcoming the challenge and refocusing his attention on his battle with CM Punk alongside Paul Heyman.

Kicking off the evening in enthusiastic fashion, WWE COO Triple H wanted to prove he was doing what was right for business. Then Paul Heyman tried – and failed – to plead for the cancellation of his Handicap Elimination Match against CM Punk.

When Triple H refused to cancel the bout, Curtis Axel attempted to support his manager by reminding The Game how the Intercontinental Champion defeated him when he became a “Paul Heyman guy.” In response, Triple H ordered Axel to defend his championship against Kofi Kingston – who recently defeated Axel on two occasions.

Although competing under protest, Axel engaged his opponent with caution, ensuring that early in the contest Kingston’s speed and agility was kept at bay. Momentum shifts were even at first and each time Kingston took advantage, Axel retreated to the outside floor to regroup. An experienced veteran, Kingston was able to use his quickness to keep Axel adjusting his strategy. Thinking he could use the environment, Axel threw his opponent toward the steel steps, but Kingston countered with an uncanny flying assault from the top.

The contest continued to rage in and out of the ring, but Axel soon took advantage after capturing Kofi in a hanging tree of woe in the corner. From there, the Intercontinental Champion methodically attacked, trying to ensure Kingston wouldn’t be able to recover. Proving his resilience, Kingston battled back, taking to the skies, bent on becoming a five-time Intercontinental Champion.

Once again the two combatants battled back and forth. Axel even countered a cross-body block from Kingston with an impressive dropkick in mid-air. From there, a series of near-falls kept the WWE Universe on the edge of its collective seat. It became evident that this victor of the match would be whoever could seize the perfect opportunity.

Although his victory against Kingston was hard-fought, Axel was unable to defeat CM Punk later in the evening. However, following even with Axel eliminated, Paul Heyman received an unexpected assist against the former WWE Champion.

Of course, we’re HustleTweeting about WWE Night of Champions, and you’re welcome to join the conversation! Just follow THE HEYMAN HUSTLE on the soon-to-be-publicly-traded Twitter HERE or write us directly at hustleoncrave@gmail.com  Hey, have you checked out the Hustle’s Ultra High Quality You Tube Channel, with exclusive videos featuring OUR WORLD EXCLUSIVE WITH MIKE TYSON … BROCK LESNAR’S “HERE COMES THE PAIN” … ICE-T AND COCO’s SEX SECRETS … TEEN SENSATION TAYLOR MOMSEN … UFC BAD BOY NICK DIAZ … THE WALKING RIOT MISSY HYATT if you’re not subscribing, you’re missing something … and by the ways cheapos, it’s FREE! Yes, absolutely 100 percent FREE! What are you waiting for? Check it out HERE!

CLICK ON THE PICS BELOW TO SEE THE ENTIRE OFFICIAL WWE GALLERY
FEATURING PAUL HEYMAN, CURTIS AXEL AND TRIPLE H IN DETROIT!