Rage Against The Machine At The Download Fest, Plus Discussion of New Recordings! 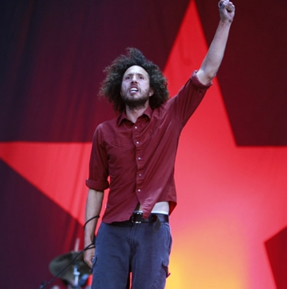 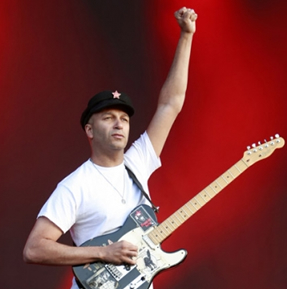 The boys kicked off their set with "Testify," and followed it up with a driving rendition of "Bombtrack."
Then came the incident in the crowd.

During "People of the Sun," a mad crush in the crowd saw some fans get injured. Zack De la Rocha halted the music, and tried to restore order. "Brothers and sisters," Zack practically pleaded,  "please, please take care of each other."

After a member of the security team came up on stage and told Zack what was happening, Zack informed everyone  "There’s a couple people been real hurt over here," and then asked some people at the front of the crowd to take a step back for their own and other fans’ safety.

When order was restored, Zack screamed out "Rewind!" and Rage started playing "People of the Sun" from the beginning.

In the introduction to "Know Your Enemy," Zack took a moment to spank Simon Cowell and X-Factor, although he did point out  the song wasn’t about the former American Idol provocateur, it was about what he represents.

Rage’s set included a cover of The Clash’s "White Riot,"  and there was a two-song encore, which finished with the entire crowd singing along to "Killing In The Name."

Here is the set listing for Rage’s awesome headline-grabbing headline-performance at The Download Festival on Saturday night, June 12, 2010:

In some awesome news for fans of the band, Zack was interviewed in the UK on June 6 that the chances of the band recording a new album are better now than they have been before. "I think it’s a genuine possibility," Zack said enthusiastically, "We have to get our heads around what we’re going to do towards the end of the year and finish up on some other projects and we’ll take it from there."

Zack offered these comments after Rage performed a free show at Finsbury Park in London for 40,000 fans.
The band promised to play the free gig as a thank you to fans for making "Killing In The Name" the No. 1 single at Christmas in the U.K. last December, beating out a tune by Simon Cowell- handpicked "X Factor" winner Joe McElderry.

CLICK ON THE PICS BELOW TO SEE THE ENTIRE GALLERY OF
PHOTOS FEATURING RAGE AGAINST THE MACHINE IN CONCERT!