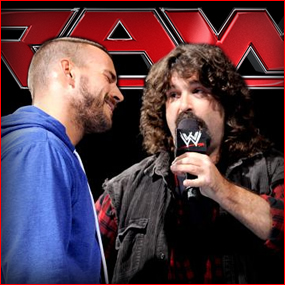 Part Two of our Triple Header covering a most eventful edition of WWE Monday Night Raw!

Mick Foley was once a “Paul Heyman Guy.” The current WWE Champion CM Punk makes no bones about being one now. And so, the stage has been set for an epic confrontation on WWE Monday Night Raw.

The Punk-Foley confrontation was covered in depth by WWE.com

Cue the car crash music and guitar riffs: Mick Foley is in the house.

The Hardcore Legend and three-time WWE Champion made an unannounced foray onto Monday Night Raw with one thing on his mind: enlightenment. Not in the philosophical sense, necessarily, but Foley arrived looking for an explanation as to where, exactly, WWE Champion CM Punk lost his way and turned from The Voice of the Voiceless into Paul Heyman’s acolyte. Punk, however, did not appreciate Mick’s “grandstanding” in the slightest, sulking to the ring and demanding that, if Foley had something to say, “say it to my face.”

Foley did something very curious then: He made Punk smile, regaled the WWE Champion with a story of their text message interaction on the night that Punk first won the WWE Title. The nostalgia (and the brief lowering of Punk’s shield) was short-lived after Foley warned him of the dangers of being a “Paul Heyman guy.” Repeating an old adage he’d heard that “Paul Heyman would rather climb a tree and tell a lie than stand on the ground and tell a truth,” Foley assured The Second City Saint that Heyman would, ultimately, only do what was best for him and not the champion.

When those efforts proved fruitless, the subject turned to a far more grisly subject: Hell in a Cell. Foley extolled the virtues of competing in the place where rivalries are settled once and for all, pitching it as the true and final test of Punk’s greatness. The Hardcore Legend’s challenge was simple: defeat Cena in the Cell and cement his legacy. Punk, however, was unmoved, smearing Foley’s historic absorptions of pain as cheap pandering to the WWE Universe while painting his own 309-day reign as undisputable proof of his dominance.

And then, the old Foley returned. “No one cares about dates,” Foley bellowed, shades of Cactus Jack shining through as The Second City Saint was stunned into silence. “They care about the moments that define us, and in my estimation … you need one more.” AJ Lee, Foley said, would allow Punk to pick his own opponent for WWE Hell in a Cell. The confrontation closed with a strange sight: Foley begged CM Punk to pick Cena, for AJ, Foley, Punk himself, but most importantly, “for them.”

“Have a nice day,” The Hardcore Legend concluded, and as he left the ring, the WWE Universe was left with the strangest of images: The Voice of the Voiceless, speechless in his own ring.

Of course, we’re HustleTweeting about CM Punk, Mick Foley, and being a Paul Heyman Guy, and you’re more than welcome to join the conversation by following THE HEYMAN HUSTLE on Twitter HERE or write to us directly at hustleoncrave@gmail.com  Hey, have you checked out the Hustle’s Ultra High Quality You Tube Channel, with exclusive videos featuring OUR WORLD EXCLUSIVE WITH MIKE TYSON … BROCK LESNAR’S “HERE COMES THE PAIN” … ICE-T AND COCO’s SEX SECRETS … TEEN SENSATION TAYLOR MOMSEN … UFC BAD BOY NICK DIAZ … THE WALKING RIOT MISSY HYATT if you’re not subscribing, you’re missing something … and by the ways cheapos, it’s FREE! Yes, absolutely 100 percent FREE! What are you waiting for? Check it out HERE!

CLICK ON THE PICS BELOW TO SEE THE ENTIRE OFFICIAL PHOTO GALLERY
FEATURING THE EPIC CM PUNK – MICK FOLEY CONFRONTATION FROM RAW! 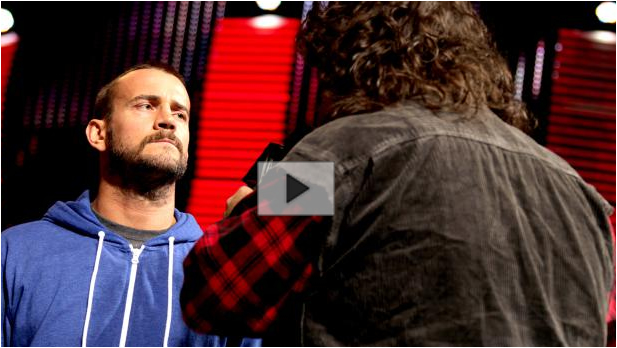