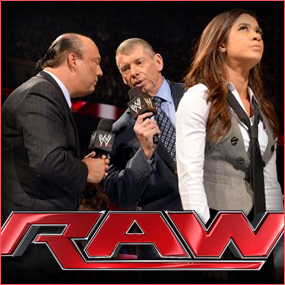 The IZOD Center in New Jersey came alive as …

Where do we even begin with all this? First, Monday Night Raw opens up, and JOHN CENA GETS CONFRONTED BY WWE CHAMPION CM PUNK AND PAUL HEYMAN!

In just as surprising a fashion as it began, the AJ Lee Era of Monday Night Raw came crashing to an abrupt halt when, with Mr. McMahon at her side, AJ announced her resignation as General Manager.

Following a mysterious meeting with the WWE Board of Directors at WWE Headquarters, AJ took center stage in her home state of New Jersey to announce that she had decided it was best to resign her post following accusations she’d been “fraternizing” with an unnamed Superstar on the roster (AJ denied the accusations). In her final moments as GM, AJ took the opportunity to give the WWE Universe a tear-jerking thank you for supporting her through her meteoric rise through the ranks and, especially, her tenure as General Manager. It was a humble, heartfelt moment and both The Chairman and the WWE Universe seemed to appreciate AJ’s candor.

And then, of course, Paul Heyman showed up.

With much fanfare, the mad scientist of ECW made an elaborate, eloquent plea to The Boss to name him the new General Manager of the red brand, as Mr. McMahon is required to immediately name a replacement. The Chairman had a similarly eloquent response for Heyman.

Instead, he introduced the “Managing Supervisor” of Raw, none other than Vickie Guerrero. No sooner had The Queen Diva taken the stage than Heyman attempted to curry favor with the new boss lady, asking Vickie to revoke CM Punk’s WWE Title Match against Ryback at Hell in a Cell. Heyman was, again, denied his request, as Vickie kicked her second administration (clearly, her show-running glory days have yet to pass her by) off with a bang by announcing two main events for her first Raw back in charge: a Champion vs. Champion Match that would also be the largest Lumberjack Match in WWE history. That was enough to send Heyman fuming back to the locker room, but Vickie wasn’t done yet.

“Tsk tsk,” Vickie began as she set her sights on AJ, elaborating that the allegations against her were not just “fraternization,” but that AJ had an affair with a Superstar. Vickie brusquely dismissed the former GM, commanding her to pack up her things and leave the arena. With nothing left to lose, however, AJ wasn’t about to leave without getting one last shot in at Vickie. And so she did, pouncing on the Managing Supervisor and unleashing one final attack on Vickie before skipping off to the locker room.

Of course, we’re HustleTweeting about this wild segment from RAW, and you’re more than welcome to join the conversation by following THE HEYMAN HUSTLE on Twitter HERE or write to us directly at hustleoncrave@gmail.com  Hey, have you checked out the Hustle’s Ultra High Quality You Tube Channel, with exclusive videos featuring OUR WORLD EXCLUSIVE WITH MIKE TYSON … BROCK LESNAR’S “HERE COMES THE PAIN” … ICE-T AND COCO’s SEX SECRETS … TEEN SENSATION TAYLOR MOMSEN … UFC BAD BOY NICK DIAZ … THE WALKING RIOT MISSY HYATT if you’re not subscribing, you’re missing something … and by the ways cheapos, it’s FREE! Yes, absolutely 100 percent FREE! What are you waiting for? Check it out HERE! 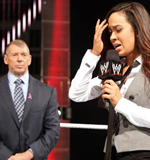 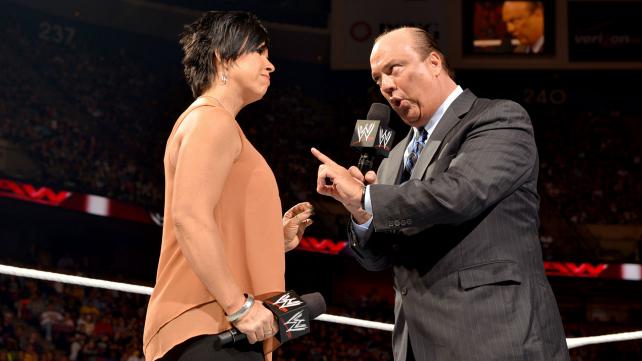 HERE’S THE VIDEO OF THE ENTIRE INCIDENT!!! 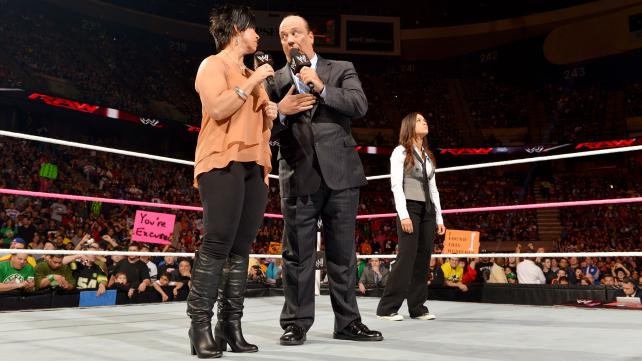