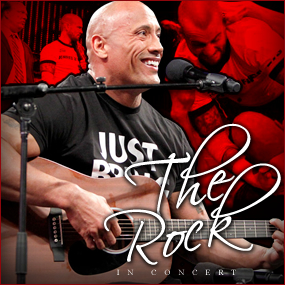 The Royal Rumble is shaping up to feature one of the most anticipated WWE Championship showdowns in history. The 20th Anniversary of WWE Monday Night Raw featured The Rock Concert…..

The Royal Rumble is shaping up to feature one of the most anticipated WWE Championship showdowns in history. The 20th Anniversary of WWE Monday Night Raw featured The Rock Concert, and as expected it ended up being not just a display of The Rock’s singing, but a fight with WWE Champion CM Punk

It’s time for The Rock to sooth his soul, WWE Universe. As Raw turned 20, The People’s Champion strolled to the ring, guitar in hand, to perform his signature sing-along for the WWE Universe. And The Great One had an audience of two in mind for his latest ditties: Paul Heyman (in absentia) and Vickie Guerrero (in person). The Brahma Bull eviscerated them in song, spinning vicious tunes that left the WWE Universe rolling in the aisles to the tune of his dulcet strumming.

But Rock changed his tune just as he finished it, calling out CM Punk when the concert reached its end. The champion who The Rock snidely dubbed “Cookie Puss” last week obliged and The Great One let loose with a little “pipe bomb” of his own.

“You said that facing you would be like boxing with God. Well you ain’t God. But God as my witness, in 13 days I will beat you for the WWE Title at the Royal Rumble.”

That was enough for Punk to drop all pretense of civility, sending the champion sprinting down the ramp. He swarmed The Great One, instigating an all-out brawl between the two that only stopped after scores of referees and WWE officials stormed the ring to separate the warring Superstars. So Raw turns 20 with a knock-down, drag-out fight. In the end, could it really ever have happened any other way?

Of course, we’re hustletweeting about this and you’re more than welcome to join the conversation by join the conversation by following us on twitter HERE or write us directly at hustleoncrave@gmail.com  Hey, have you checked out the Hustle’s Ultra High Quality You Tube Channel, with exclusive videos featuring OUR WORLD EXCLUSIVE WITH MIKE TYSON … BROCK LESNAR’S “HERE COMES THE PAIN” … ICE-T AND COCO’s SEX SECRETS … TEEN SENSATION TAYLOR MOMSEN … UFC BAD BOY NICK DIAZ … THE WALKING RIOT MISSY HYATT if you’re not subscribing, you’re missing something … and by the ways cheapos, it’s FREE! Yes, absolutely 100 percent FREE! What are you waiting for? Check it out HERE!

CLICK ON THE PICS BELOW TO SEE THE OFFICIAL WWE GALLERY FEATURING
PHOTOS FROM THE ROCK CONCERT DURING RAW’s 20th ANNIVERSARY!

THE ROCK AND CM PUNK COLLIDE AT THE END OF WWE MONDAY NIGHT RAW! 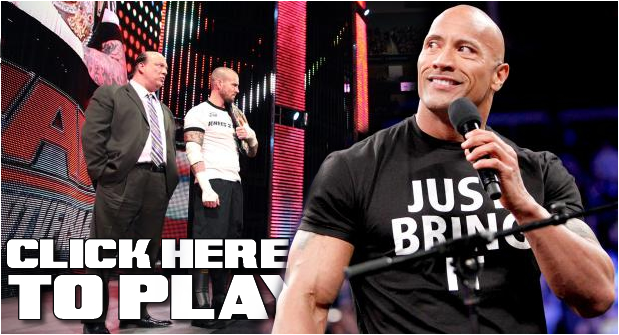