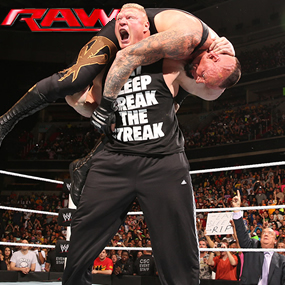 #EatSleepBreakTheStreak takes on a whole new meaning in Washington DC as our own Hustler De Tuti Hustlers Paul Heyman witnesses what could be the end of the Deadman’s Streak!

This Sunday, WWE presents The Undertaker and the greatest undefeated streak in sports entertainment history against its most serious challenge, the Paul Heyman -led Beast Incarnate Brock Lesnar. And if there was ever reason to worry about The Undertaker, what happened in Washington, DC is a perfect example of why fans of The Undertaker need to be quite concerned about this Sunday’s matchup. According to WWE.com:

WASHINGTON, D.C. – For one last time before The Show of Shows, The Deadman rose on Monday Night Raw to deliver one final message to his WrestleMania opponent, Brock Lesnar. Much has been made of The Undertaker’s supposed vulnerability leading into his 22nd defense of the vaunted Streak in New Orleans. Despite the mounting whispers of his doubters, The Phenom remained steadfast in his promise to stave off The Beast Incarnate in six days’ time and maintain one of life’s three guarantees: Death, taxes and The Streak.

Actions, ultimately, proved The Demon of Death Valley to be more fallible than he let on; Lesnar and Paul Heyman not only interrupted Undertaker’s final message to The Anomaly, but Lesnar himself left The Deadman down when he stormed the ring and laid out the former WWE Champion with an F-5 that would have made the Devil himself cringe.

Of course, we’re HustleTweeting about WrestleMania XXX, and you’re more than welcome to join the conversation (and you have to realize, this is one ridiculously lively conversation) by writing us on twitter HERE or write to us directly at hustleoncrave@gmail.com  Hey, have you checked out the Hustle’s Ultra High Quality You Tube Channel, with exclusive videos featuring OUR WORLD EXCLUSIVE WITH MIKE TYSON … BROCK LESNAR’S “HERE COMES THE PAIN” … ICE-T AND COCO’s SEX SECRETS … MMA BAD BOY NICK DIAZ … the list goes on and on, so if you’re not subscribing, you’re missing something … and by the ways cheapos, it’s FREE! Yes, absolutely 100 percent FREE! What are you waiting for? Check it out HERE!

CLICK ON THE PICS BELOW TO SEE THE ENTIRE OFFICIAL WWE PHOTO
GALLERY FEATURING BROCK LESNAR – PAUL HEYMAN – THE UNDERTAKER!

BROCK LESNAR HITS THE UNDERTAKER WITH THE F-5! 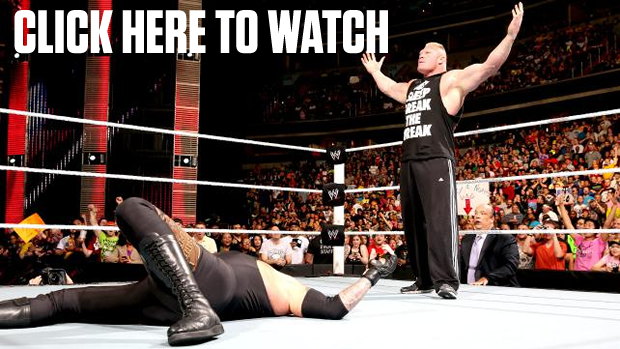