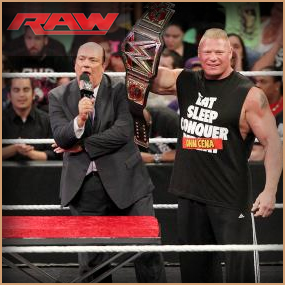 It may go down as the greatest promo in our Boss’ career. There’s a new reigning defending WWE Heavyweight Champion of the World, and his name is BROCK LESNAR!

After BROCK LESNAR CONQUERED THE UNDERTAKER’S UNDEFEATED STREAK AT WRESTLEMANIA everyone new what was next …  Our very own Hustler De Tuti Hustlers PAUL HEYMAN CUT AN EPIC PROMO DETAILING BROCK’S HISTORIC MOMENT! So now, since BROCK LESNAR CONQUERED JOHN CENA FOR THE WWE TITLE AT SUMMERSLAM, it’s time for Paul to do his thing again. And that’s exactly what our Boss did! According to WWE.com:

Having crushed his enemies, seen them driven before him, and heard the lamentation of the Cenation, Brock Lesnar is truly nothing if not a conqueror. And like any conqueror worth his salt, The Beast Incarnate received his crown from none other than The King of Kings himself when Triple H presented Brock with a brand-new WWE World Heavyweight Championship. Following the coronation, it was Paul Heyman  – once again the advocate for a reigning, undisputed WWE Champion – who commemorated the crowning of his client with a speech proclaiming nothing less than the death of Hustle, Loyalty, Respect, the Cenation itself, and any prospective challenger to The Beast’s crown.

Of course, we’re HustleTweeting about BROCK LESNAR and Paul Heyman and you’re more than welcome to join the conversation by following us on twitter HERE or write to us directly at hustleoncrave@gmail.com Hey, have you checked out the Hustle’s Ultra High Quality You Tube Channel, with exclusive videos featuring OUR WORLD EXCLUSIVE WITH MIKE TYSON … BROCK LESNAR’S “HERE COMES THE PAIN” … ICE-T AND COCO’s SEX SECRETS … MMA BAD BOY NICK DIAZ … the list goes on and on, so if you’re not subscribing, you’re missing something … and by the ways cheapos, it’s FREE! Yes, absolutely 100 percent FREE! What are you waiting for? Check it out HERE!

CLICK ON THE PICS BELOW TO SEE THE ENTIRE OFFICIAL WWE
PHOTO GALLERY FEATURING THE CORONATION OF BROCK LESNAR! 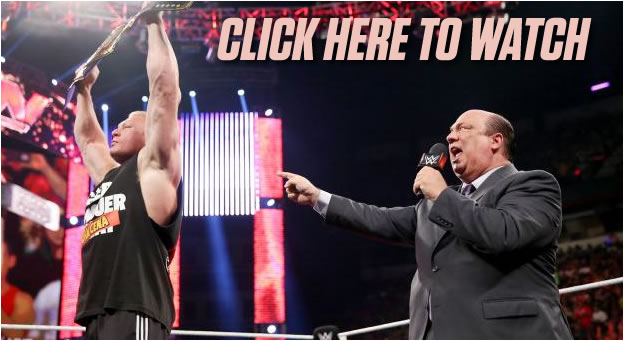