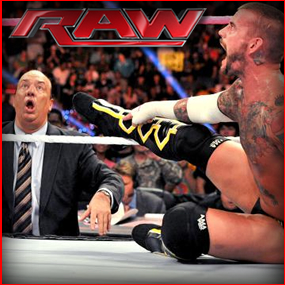 For the 2nd night in a row, a major controversy has engulfed the conclusion of WWE’s broadcasts … and once again, CM Punk and our own Hustler De Tuti Hustlers are right in the middle of it all!

The controversy that erupted in Boston, Massachusetts when WWE CHAMPION CM PUNK AND JOHN CENA’S TITLE MATCH ENDED IN A DOUBLE PIN at the conclusion of Night of Champions carried over to Bridgeport, Connecticut, as Cena teamed with Smackdown’s World Champion Sheamus to take on Punk and Albert Del Rio.

The match, just like the main event of Night of Champions, ended in controversy, as referee Brad Maddox made a blatantly bad call by awarding the decision to Cena and Sheamus after counting Punk’s shoulders down on the mat despite Punk had a foot on the bottom rope, which historically means the count must stop.

Raw began only 24 hours after the conclusion to Night of Champions, but the controversial coda to the pay-per-view left a fallout so severe it felt like it had been brewing for years. From the second the opening pyro boomed, the WWE Universe was riled up, hungry for answers as to what the implications of the WWE Championship Match — a double pinfall draw that saw CM Punk retain his title against John Cena — would be. Salvation seemingly arrived moments into the show as the opening chords of “Cult of Personality” ripped through the Webster Bank Arena, and who should arrive but … Paul Heyman.

Far from a glimpse into the future, though, the mad scientist was only on hand to bring vindication to his friend’s dubious retention. Heyman wasted no time in summoning WWE referee Chad Patton, who officiated the title contest, to the ring to bring vindication to the double pinfall that left the title in Punk’s hands. Heyman produced not only a still photo from the title match, but somehow procured fan-shot footage from a camera phone in the front row of the fateful German suplex that led to the double pinfall. His work seemingly done, Heyman began to extol the virtues of The Second City Saint and took up the champion’s cause of demanding respect.

John Cena, however, was having none of it. The Cenation leader, showing no ill effects of the ankle injury he suffered at Night of Champions, stormed down to the ring and shockingly agreed with Patton’s decision, but not the “finality” of it. Unable and unwilling to accept that Punk and Cena’s roiling rivalry could possibly conclude in a double pinfall (and unwilling to give Punk respect based off of same), Cena offered up a solution: a title rematch later that same night.

Heyman, evoking his status as “The Voice of the Voice of the Voiceless,” began to respond until the overture of Alberto Del Rio’s music cut him and Cena off mid-sentence. The Essence of Excellence, still flanked by the injured Ricardo Rodriguez, wasted no time in condemning SmackDown General Manager Booker T’s reinstatement of the Brogue Kick, and the fact that it (according to Del Rio) cost him the World Heavyweight Championship at Night of Champions. As “the man who never lies,” Del Rio demanded that he receive a title rematch.

That brought out Raw GM AJ Lee to settle the debate: Eyes wide with the fire of inspiration, AJ declared she’d come up with a “super main event”: A tag match pitting WWE Champion CM Punk & Del Rio against World Heavyweight Champion Sheamus & Cena. “And who knows?” she concluded. “Whoever wins will go a long way toward determining if there will be a rematch and who will be in it.”