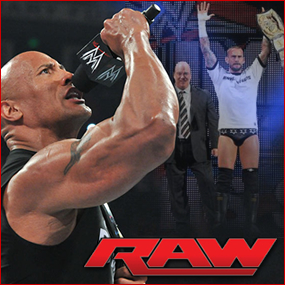 The Great One finished entertaining the WWE Universe with the stories of his youth when CM Punk and Paul Heyman made their presences known, emerging from the locker room and mean-mugging The People’s Champion from afar…

WWE Monday Night RAW opened up this week with THE SHOCKING RESIGNATION OF PAUL HEYMAN only to have CM Punk talk our very own Hustler De Tuti Hustlers out of leaving WWE. The show ended with Punk coming down to the ring … Paul tripping The Rock during an attempted People’s Elbow … and Punk hitting the GTS, enabling the former WWE Champion to leave the arena with the title belt itself!

In an exclusive interview with THE HEYMAN HUSTLE (hey, of course we scooped WWE.com … Paul owns this website!!!), Paul told us “Possession is nine-tenths of the law. The Rock can bitch and moan all he wants about CM Punk claiming to be the rightful, undisputed reigning defending WWE Champion. But it was The Rock who stole the WWE Title from CM Punk, and he didn’t do it alone. Rock conspired with Vincent Kennedy McMahon — who paid a hefty price for his long standing abuse of power … although I had nothing to do Brock Lesnar’s decision to deliver that punishment to Vince, and am sorry that he did it  … but he did it nonetheless — and now The Rock must face the fact there is no honor amongst thieves. Since CM Punk has possession of the actual title belt, the best The Rock can do is claim to be the reigning defending DISPUTED WWE Champion. CM Punk, however, has a legitimate claim to the title, and he will grant The Rock a rematch for the title on the 455th day of the most significant title reign of the modern era this Sunday. I’d say good luck to The Rock, but that would be disingenuous, and that’s just not my style!”

The WWE Champion’s history with Nashville is long and storied, and we don’t just mean the surreal yarn The Rock spun for the WWE Universe about a car he acquired through suspect means in his youth. The Music City is where The People’s Champion had his first match, it’s where he went to high school for a time, and in 2013, it was the site of a crass act of robbery against The Brahma Bull: the theft of the WWE Championship itself.

The Great One finished entertaining the WWE Universe with the stories of his youth when CM Punk and Paul Heyman made their presences known, emerging from the locker room and mean-mugging The People’s Champion from afar. Rock beckoned Punk and Heyman to “bring it,” and bring it they did. The Straight Edge Superstar swarmed the WWE Champion and seemed doomed to a Music City mauling when The People’s Champion planted Punk with a spinebuster and prepared for The People’s Elbow. But right as The Rock was running the ropes, Heyman struck and tripped up The Great One, allowing Punk to capitalize by nailing The Great One with the Go to Sleep.

With the champion unconscious, Punk committed an act of in-ring larceny, seizing the WWE Title beside the fallen champion and absconding with the prize, pausing only once to acknowledge his foe from the top of the ramp.

“Storytime’s over, Rock,” Punk sneered in the ultimate act of defiance from a lifelong rebel. “I want you to understand one thing: Every time you wanna bring it, because it belongs to me, I’m just gonna take it.”

CLICK HERE FOR YOUR CHANCE TO PURCHASE A SPECIAL DISCOUNTED WWE PACKAGE DEAL ON BOTH THE CM PUNK AND THE #PaulHeymanGuy T-SHIRTS!

We are HustleTweeting about CM Punk vs The Rock this Sunday at the Elimination Chamber pay per view, and you’re more than welcome to join the conversation by following the Hustle on Twitter HERE … Hey, we’re also on Facebook HERE … and since we haven’t updated our MySpace page even though Justin Timberlake has invested in your grandpa’s social media, you’re welcome to check out our much-ignored page HERE.

CLICK ON THE PICS BELOW TO SEE THE ENTIRE OFFICIAL WWE PHOTO GALLERY
FEATURING CM PUNK TAKING BACK THE WWE TITLE BELT!

CM PUNK TAKES THE WWE TITLE BELT FROM THE ROCK ON RAW! 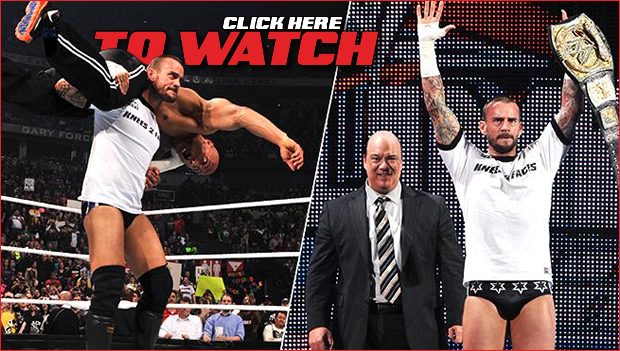