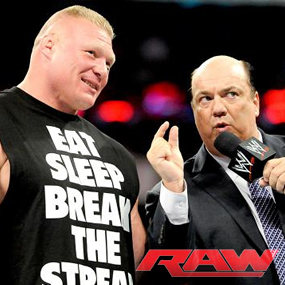 Our very own Hustler De Tuti Hustlers tops himself with the promo of a lifetime on the live April 7, 2014 edition of WWE Monday Night RAW!

When we here at THE HEYMAN HUSTLE are left speechless by the words of our boss, you know something really extraordinary has taken place. From the moment Brock Lesnar and Paul Heyman hit the ring at The Smoothie King Arena in New Orleans, you had the sense something quite special was about to take place. Little did any of us know just how special of a moment this would be in the history of Paul Heyman and Brock Lesnar. As you all know, BROCK LESNAR BROKE THE UNDERTAKER’S UNDEFEATED STREAK AT WRESTLEMANIA XXX … a victory so unfathomable, THE SHOCKED LOOKS ON THE FACES OF FANS AT THE SUPER DOME will forever be etched in the history of WrestleMania. So on this night, in front of this raucous crowd, Brock Lesnar and Paul Heyman came out to rub it in. According to the fine reporters at WWE.com:

Well, we can’t say we weren’t warned. The WWE Universe was told by Paul Heyman, time and again, that his monstrous client would be the one to defy The Undertaker and suck the life from his WrestleMania Streak. Even a day after that fateful F-5 sent The Phenom from the ’72 Dolphins to the ’07 Patriots, it’s difficult to believe the mad scientist’s typically empty rhetoric carried so much weight. Yet, Lesnar and Heyman – with the headlines to back them up – strutted down Bourbon Street with the swagger of two Egyptian Pharaohs, relating the story of The Deadman’s trip to the hospital and the prevailing excellence of Lesnar himself. As for the WWE Universe, they are nothing more than “wannabes” in Lesnar’s black-and-blue eyes, while The Anomaly himself is “The one … the one in 21-1.”

Of course, we’re HustleTweeting about Paul Heyman’s interview crowning Brock Lesnar as “The One” and you’re more than welcome to join the conversation (and you have to realize, this is one ridiculously lively conversation) by writing us on twitter HERE or write to us directly at hustleoncrave@gmail.com  Hey, have you checked out the Hustle’s Ultra High Quality You Tube Channel, with exclusive videos featuring OUR WORLD EXCLUSIVE WITH MIKE TYSON … BROCK LESNAR’S “HERE COMES THE PAIN” … ICE-T AND COCO’s SEX SECRETS … MMA BAD BOY NICK DIAZ … the list goes on and on, so if you’re not subscribing, you’re missing something … and by the ways cheapos, it’s FREE! Yes, absolutely 100 percent FREE! What are you waiting for? Check it out HERE! 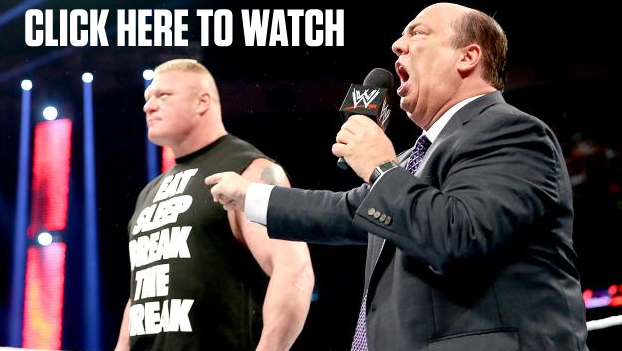