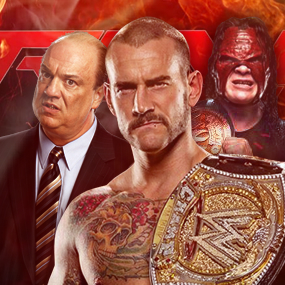 It’s Your WWE RAW Report, and a Real Pattern is Emerging on Monday Nights in Matches Involving The Reigning Defending Champion CM Punk and our very own Hustler De Tuti Hustlers Paul Heyman!

The WWE Universe was given the choice of CM Punk facing either Kane or Daniel Bryan in the main event of Monday Night Raw, but no one was offered a chance to vote if The Shield would get involved.

The WWE Universe spoke, and so it was that CM Punk, on the 372nd night of his WWE Title reign, found himself in hell once again. Renewing their rivalry from earlier this year, The Second City Saint and The Devil’s Favorite Demon collided in a RAWactive Match when Punk took on WWE Tag Team Champion Kane in a hard-hitting bout that shook the Cajundome to its core.

And while there was no romantic entanglement to motivate either man this time around, Punk and Kane both came out swinging, with The Second City Saint unleashing body shots on The Big Red Machine in an attempt to slow the Tag Team Champion down before he could get the ball rolling. Kane, for his part, adopted an unusually patient game plan, absorbing Punk’s attacks and retaliating with quick bursts while the champion preened for the crowd. Kane hit The Voice of the Voiceless with a barrage of chops in the corner before bouncing Punk off the ropes and booting him from the ring.

Punk switched up his style quickly after that, targeting Kane’s legs and lulling the demon into a false sense of security by playing possum, milking an injured knee to force Kane’s guard down. The strategy paid dividends when Punk executed a dive that left Kane reeling, following the attack by stomping on the monster’s legs and softening him up for a pair of running knees into the corner.

The third knee, however, didn’t go so great for him. Kane surged forward as Punk went for the trifecta, decking the champion with a chop to the face and flattening Punk with a sidewalk slam. Kane then set him up for the flying clothesline that so often precedes the Chokeslam.

But Punk was ready for Kane’s signature move, ducking under the demon’s gloved hand and countering with a swinging neckbreaker. Kane got the last word in, however, when he caught Punk in the middle of his own flying clothesline and finally planted the champion with the Chokeslam. With Punk down, Kane decided to seal the match with a statement and called for the Tombstone, but it wasn’t long before a trio of interlopers made themselves known. The Shield slowly materialized from the crowd, and their presence was enough to distract Kane for Punk to execute the Go to Sleep on The Big Red Monster. The Second City Saint quickly put the Tag Champion down and left him to the mercy of The Shield, who swarmed the ring and rained blows upon the prone Kane. Daniel Bryan suffered a similar fate when he ran to his partner’s aid, and just when it seemed like Punk would get off scot-free, Ryback returned for a piece of the action.

For once, though, his attentions were focused elsewhere than Punk because Ryback made a beeline for The Shield, planting Rollins with a powerbomb and cutting Ambrose and Reigns down with a pair of Meathook Clotheslines before Punk struck from behind. Ryback’s attempt to powerbomb the champ into oblivion proved fruitless when Reigns felled Ryback with a spear. With the beast vulnerable, The Shield ended their onslaught as they had the past two instances: a triple powerbomb that left Ryback limp on the mat, with Punk standing tall yet again over his TLC opponent. Whether he’ll be doing so again in three weeks’ time at Barclays Center remains to be seen.

Of course, we’re HustleTweeting about CM Punk vs Kane, and The Shield as well, and you’re more than welcome to join the conversation by following us on Twitter HERE or write us directly at hustleoncrave@gmail.com  Hey, have you checked out the Hustle’s Ultra High Quality You Tube Channel, with exclusive videos featuring OUR WORLD EXCLUSIVE WITH MIKE TYSON … BROCK LESNAR’S “HERE COMES THE PAIN” … ICE-T AND COCO’s SEX SECRETS … TEEN SENSATION TAYLOR MOMSEN … UFC BAD BOY NICK DIAZ … THE WALKING RIOT MISSY HYATT if you’re not subscribing, you’re missing something … and by the ways cheapos, it’s FREE! Yes, absolutely 100 percent FREE! What are you waiting for? Check it out HERE!

CLICK ON THE PICS BELOW TO SEE THE ENTIRE OFFICIAL WWE GALLERY
OF CM PUNK vs KANE FROM THIS WEEK’S EDITION OF MONDAY NIGHT RAW! 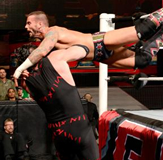 CHECK OUT CM PUNK VS KANE … with THE SHIELD INVOLVED … FROM RAW! 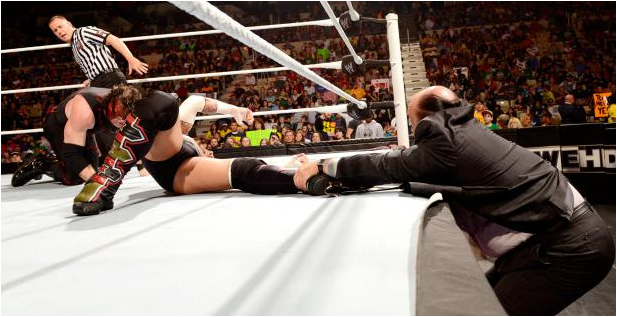