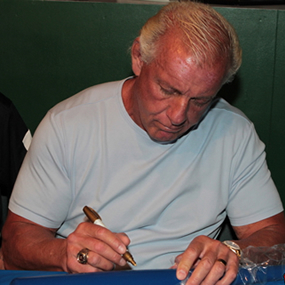 Prev1 of 4Next
Use your ← → (arrow) keys to browse
The Nature Boy is at the Center of Controversy Once Again!

There are some wild reports about a strange situation involving Nature Boy Ric Flair and his appearance (or lack thereof) at the end of the TNA live event in Brooklyn, New York.

Award winning photographer George Tahinos, whose amazing gallery featuring OVER 130 EXCLUSIVE PHOTOS FROM THE DAVEY RICHARDS VS EDDIE EDWARDS ROH TITLE MATCH IN NYC has received enormous positive feedback, caught these exclusive images of Flair signing autographs during the intermission at the TNA live event, which was a stadium show at the home of the Brooklyn Cyclones minor league baseball team.

CLICK HERE TO SEE ALL THE EXCLUSIVE PHOTOS OF RIC FLAIR IN BROOKLYN!

Of course, we’re HustleTweeting about these Ric Flair photos, and you’re more than welcome to join the conversation by following THE HEYMAN HUSTLE on Twitter HERE or write to us directly at hustleoncrave@gmail.com