UPDATED! More Exclusive Photos of Nature Boy Ric Flair Right Before The Controversy at the TNA Live Event in Brooklyn 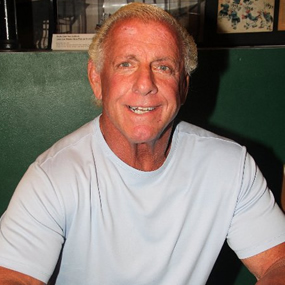 Prev1 of 7Next
Use your ← → (arrow) keys to browse
THE HEYMAN HUSTLE has exclusively obtained more photos from another perspective of Ric Flair on a most controversial night at the home of the Brooklyn Cyclones!

Earlier today, we posted EXCLUSIVE PHOTOS BY GEORGE TAHINOS OF RIC FLAIR SIGNING AUTOGRAPHS IN BROOKLYN, NEW YORK DURING THE TNA LIVE EVENT, which were taken just about an hour or so before all hell broke loose when Flair and TNA had a disagreement regarding whether or not Flair was supposed to appear in the ring during the show.

Now, we have more exclusive photos of The Nature Boy from his autograph session. Hustle photo ace Bob Mulrenin snapped these photos, obviously not knowing the storm that was about to it. “I still can’t believe what a controversial night that has become!” Mulrenin told the Hustle this evening, “Flair was happy to participate in the autograph session, and was WHOOOOing with the fans, and having a great time! I really don’t know what happened backstage, I was covering RVD vs AJ Styles, and then I heard Flair had left the ballpark. Very strange situation!”

We’re HustleTweeting about Flair and TNA, and you’re more than welcome to join the conversation by following the Hustle on Twitter HERE or write to us directly at hustleoncrave@gmail.com