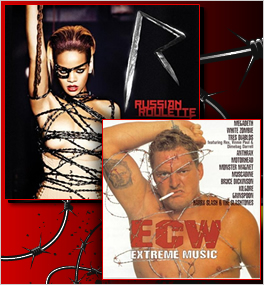 Prev1 of 3Next
Use your ← → (arrow) keys to browse
The entertainment community is abuzz about Rihanna’s new album cover, where the once-but-never-again-almost- Mrs.-Chris-Brown is wrapped up in barbed wire, with her right arm in the air, and blood dripping on the cover design.
Hmmmmmmmmmmm……… is this familiar to anyone?

In 1998, our own Hustler de Tuti Hustlers Paul Heyman was the owner, operator, and creative force behind the revolutionary Extreme Championship Wrestling (ECW) promotion, and one of the many exploitations of the ECW intellectual property was “ECW: THE MUSIC VOLUME ONE” which included a grammy-nominated cover of “Enter Sandman” by Motorhead.

Yes, Paul Heyman was using original Motorhead music long before HHH ever had them compose and perform “The Game.”

So, here’s Rihanna’s album cover today, and here’s The Sandman on the cover of the ECW album in 1998. Hardcore thievery? Dangerously Inspired? “Extreme” Coincidence?

We’ll let you be the judge.

(Applications now being accepted for jury and executioner).