There are tons of tributes online, all quite deserving, honoring the memory of the last surviving member of The 3 Wise Men of the East.

In Vince McMahon Senior’s vision of professional wrestling, the embattled babyface champion was always surrounded by enemies. Whether it was Bruno Sammartino, Pedro Morales, or Bob Backlund, the World Wide Wrestling Federation (pre-cursor to today’s World Wrestling Entertainment) was what some would describe as “a babyface territory.” The good guy aka “babyface” ruled the top of the card.

The heels that challenged Sammartino, Morales, and Backlund for the title would come and go, but there was always a constant in the equation: The Three Wise Men. Lou Albano, Fred Blassie, and The Grand Wizard were the only managers on WWWF television. For years, no other manager got to play “New York” (as the WWWF was known within the industry).

None, to be blunt, were needed. The Three Wise Men all understood how to draw money. They were, as a unit, a triad of tyranny. Blassie was the cantankerous old man, always labeling the heroes and the fans “Pencil Neck Geeks.” He was the Hollywood Fashion Plate, a heel to be taken seriously, and the master of acting surprised that his underhanded tactics were not appreciated by the masses.

Ernie Roth was the conniving curmudgeon of chaos, a menacing little man with a mean streak bigger than Superstar Billy Graham’s arms. The way he accentuated key words only added to the hatred people felt for him, as he pointed his finger straight into the camera, and articulated on bizarre historical references to back up his hypotheses as to why the established champion was, underneath the veneer, trying to conspire against his client. Both Blassie and Roth understood booking, and understood how to position themselves and their wrestlers as top draws even after Sammartino, Morales, or Backlund were finished touring the Northeast circuit with them.

And then there was Albano. 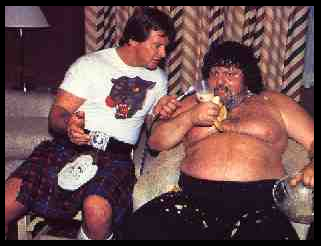 The only one of the three who could bump. Blassie, by this time, was so banged up that he couldn’t really be touched. Ernie was almost as unathletic as I am. But Albano was always ready to be bounced around, whip out the blade, and take a few more dollars from the gentlemanly patriarch of the current ruling wrestling family.

Lou could talk. Oh man, could he talk. There were no influences in the way he came across. The Captain had a style all of his own. “I just remember the point I wanna bring across,” Lou once told me, “and then I just babble before, during, and after. Somehow, in the middle, I said the two or three sentences that sold tickets. Mostly, I just tried to make people want to see me get my ass kicked, and along the way, hopefully the guy I was managing would catch a beating too!”

So, here we are. It’s October 14, 2009, and we’re discussing the passing of someone who many could argue was truly the greatest manager of all time. It’s hard to argue against the choice of Bobby “The Brain” Heenan, but if there’s ever been someone to point to as “better than The Brain,” the only choice in my mind was Albano. His impact on the way wrestling was and even to this day is presented cannot be understated. His mannerisms, his way of talking, his ability to draw heat were all unparalleled in his day. He was one of the major catalysts for Vincent Kennedy McMahon’s national expansion, as his work with Cyndi Lauper begat The Rock n Wrestling Connection, which gave birth to the Hogan-Piper feud, which delivered The War To Settle The Score, and ultimately the very 1st Wrestlemania.

There are so many “Albano” stories to tell, from the time he ran in his shorts and flip flops up 8th Avenue in New York City when his car broke down during a snow storm, and had hundreds of people following him to what was then known as The Howard Johnson’s Hotel where everyone stayed; to the time he got into a drinking contest with Andre The Giant at the hotel bar, took a Ric Flair-esque face bump into the top of a stool, cracked his head, and was knocked out cold … only to wake up when Don Muraco and Greg Valentine helped peel Lou off the floor. Lou ran outside, threw up all over the sidewalk (with half the remnants of his dinner prominently remaining on his hairy chest), came back inside, ordered another 3 rounds, turned to Andre and said “I get a 3 drink handicap for that bump!”

In this article:captain lou, lou albano