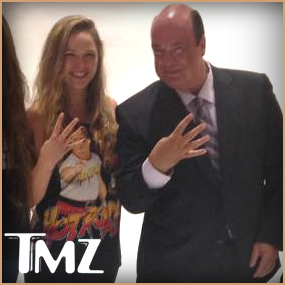 When RONDA ROUSEY AND THE FOUR HORSEWOMEN SHOWED UP BACKSTAGE AT WWE SUMMERSLAM we here at THE HEYMAN HUSTLE figured it was a much bigger deal than what just meets the eye. And, indeed, so does TMZ, which reports:

Seems Ronda Rousey is one step closer to making an official WWE cameo … because the UFC champ was hangin’ with one of the greatest wrestling managers in history this weekend.

Rousey and her crew (dubbed the 4 Horsewomen) hit up SummerSlam Sunday night in L.A. — where they rubbed elbows backstage with Brock Lesnar’s manager Paul Heyman.

Our sources tell us Rousey and Heyman got along great — and Ronda (a huge wrestling fan) was stoked to meet the guy.

As we previously reported … Rousey has expressed interest in a guest wrestler role at WrestleMania 31 in SF next year — and she wants the 4 Horsewomen in her corner.

No word if Rousey and Heyman talked shop when they hung out this weekend — but Heyman has worked with other UFC stars in the past (including Lesnar) so he could be the perfect guy to make Ronda’s WWE dreams come true.

Don’t worry UFC fans, we’re told Ronda’s #1 passion is MMA — and she’s not planning on giving that up anytime soon — she’s just a huge WWE fanatic and thinks a WWE cameo would be fun.

Of course, we’re HustleTweeting about Ronda Rousey, and you’re more than welcometo join the conversation by following us on twitter HERE or write to us directly at hustleoncrave@gmail.com Hey, have you checked out the Hustle’s Ultra High Quality You Tube Channel, with exclusive videos featuring OUR WORLD EXCLUSIVE WITH MIKE TYSON … BROCK LESNAR’S “HERE COMES THE PAIN” … ICE-T AND COCO’s SEX SECRETS … MMA BAD BOY NICK DIAZ … the list goes on and on, so if you’re not subscribing, you’re missing something … and by the ways cheapos, it’s FREE! Yes, absolutely 100 percent FREE! What are you waiting for? Check it out HERE!