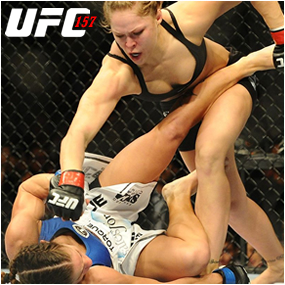 Ronda Rousey Forces Liz Carmouche to Tap Out with 11 Seconds Left in the 1st Round as Women’s MMA Takes Center Stage in the Main Event of UFC 157! 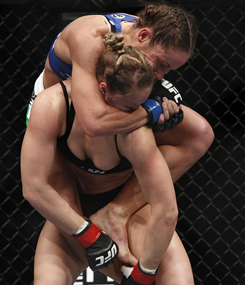 Ronda Rousey Forces Liz Carmouche to Tap Out with 11 Seconds Left in the 1st Round as Women’s MMA Takes Center Stage in the Main Event of UFC 157!

It was almost the greatest upset in UFC history.

In the opening moments of the very first women’s fight in UFC history, Liz Carmouche almost spoiled the party by getting Ronda Rousey’s back and damn near choked her out. It seriously just could not have been a closer call for the most publicized female in MMA history.

But Rousey turned the tables on the openly lesbian military vet and secured a first round victory via tap out to the arm bar with 11 seconds left in the 1st round.

Rousey (7-0) defended the UFC Women’s Bantamweight Championship the same way she’s won every single MMA fight she’s been in, forcing Carmouche to tap out after snatching the arm and bending it back. Of course, we’re HustleTweeting about Ronda Rousey vs Liz Carmouche, and you’re more than welcome to join the conversation by following THE HEYMAN HUSTLE on Twitter HERE … Hey, we’re also on Facebook HERE … and since we haven’t updated our MySpace page even though Justin Timberlake has invested in your grandpa’s social media, you’re welcome to check out our much-ignored page HERE.