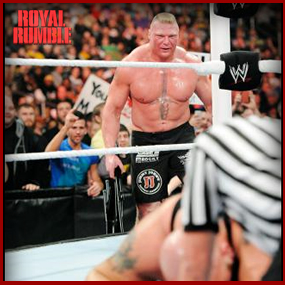 It was one of the most sinister beatings in WWE history, as our own Hustler De Tuti Hustlers Paul Heyman witnesses his client Brock Lesnar’s utter destruction of The Big Show!

Our boss Paul Heyman has vowed that Brock Lesnar will conquer and subjugate the entire WWE Universe, and if Brock’s decimation of The Big Show is demonstrative of anything, it’s a look into a reign of terror that can only be described as … you guessed it … unmerciful. According to WWE.com:

PITTSBURGH — While Big Show may have been able to manhandle Brock Lesnar in their impromptu brawls over the past few weeks, got the better of The World’s Largest Athlete  at the 2014 Royal Rumble event. Before and after the match, Lesnar demolished Big Show with series of brutal steel chair attacks that will be talked about for years to come.

The man Paul Heyman dubbed “Brock the Unmerciful” did not even let the bell ring, tackling Big Show to the ground and pounding the giant with clubbing blows. While Lesnar whaled away on The World’s Largest Athlete, Heyman slid a steel chair into his client’s clutches.

Lesnar smashed the chair over Big Show’s back and arms repeatedly, mangling the steel seat over the giant’s massive frame. The official was able to temporarily stop the carnage and ask Big Show if he wanted to compete. The giant, unable to lift his battered left arm, the match finally started. Though Lesnar grabbed another chair, he did not get to use it. Charging at Big Show, Brock instead ran into a KO Punch that sent him crashing to the canvas and unable to get up. Unfortunately for Big Show, he had been beaten so badly with a chair before the match that he could not cover Lesnar.

The carnage spilled to the arena floor, where Big Show temporarily gained the upper hand, targeting the midsection of The Beast Incarnate with right hands. Once they got back into the ring, The World’s Largest Athlete tried to capitalize and put Lesnar down for the count with another KO Punch. Lesnar wasn’t having any of that, though. Instead, “Brock the Unmerciful” ducked the shot-put sized fist, hoisted Big Show up on his massive shoulders, carried the giant around the ring and sent him crashing to the mat with a thunderous F-5 to pick up the victory.

The sold-out crowd at Pittsburgh’s CONSOL Energy Center was in awe as Lesnar stared into his hands after the bell, contemplating the carnage he just created with them. As The Beast Incarnate stalked out of the ring, he saw another steel chair and grabbed it.

Big Show didn’t have a chance to recover from the F-5 before Lesnar violently laid into him with not one, but three separate steel chairs, destroying two of them in the process. The sickening sound of steel crashing against bone rang throughout the arena as Brock destroyed the chairs over Big Show’s arms, legs, back and chest with vicious strikes.

By the time Heyman walked Lesnar away from ringside, The Beast Incarnate connected with 20 stomach-turning chairshots. The ringside floor looked like a warzone, with twisted steel and debris littering the area surrounding the ring. The WWE Universe was in a stunned silence as doctors and officials tended to Big Show, who was barely able to walk out under his own power. The World’s Largest Athlete refused any medical attention following the bout and would not let anyone into his locker room. Sources described the ailing Big Show to WWE.com as “one angry giant.”

If the brutal massacre Big Show was put through at the hands of Brock Lesnar is a true example of what The Beast is capable of, there may not be anyone who can stop “Brock the Unmerciful” from becoming WWE World Heavyweight Champion.

Of course, we’re HustleTweeting about The Royal Rumble pay per view, and you are more than welcome to join the conversation by following THE HEYMAN HUSTLE on Twitter HERE or write to us directly at hustleoncrave@gmail.com  Hey, have you checked out the Hustle’s Ultra High Quality You Tube Channel, with exclusive videos featuring OUR WORLD EXCLUSIVE WITH MIKE TYSON … BROCK LESNAR’S “HERE COMES THE PAIN” … ICE-T AND COCO’s SEX SECRETS … MMA BAD BOY NICK DIAZ … the list goes on and on, so if you’re not subscribing, you’re missing something … and by the ways cheapos, it’s FREE! Yes, absolutely 100 percent FREE! What are you waiting for? Check it out HERE!

You can also check out our interactive skills on Facebook HERE and even though we long abandoned MySpace, we thought we’d throw in the stupid link HERE. If you’re on Friendster, GFY … and have a pleasant tomorrow!

CLICK ON THE PICS BELOW TO SEE THE ENTIRE OFFICIAL WWE PHOTO
GALLERY FEATURING BROCK LESNAR’S BRUTAL BEATDOWN OF THE BIG SHOW
AT THE 2014 ROYAL RUMBLE PAY PER VIEW FROM PITTSBURGH!